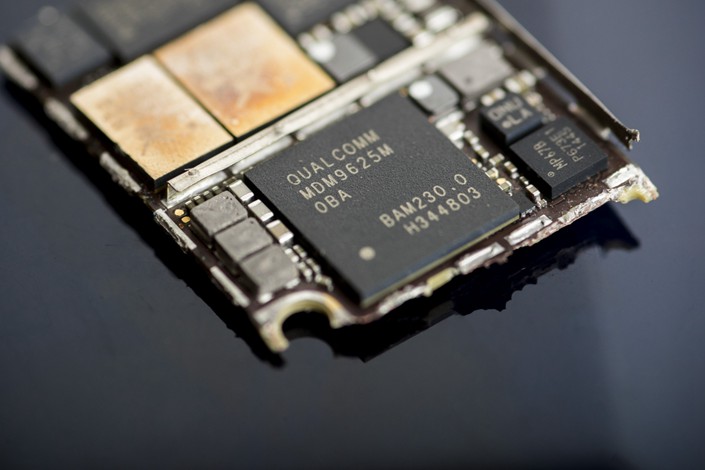 A Qualcomm chip inside an Apple iPhone 6 smartphone. Photo: Bloomberg

(Bloomberg) — Chinese President Xi Jinping said he would consider approving a possible $44 billion deal for Qualcomm Inc. to purchase NXP Semiconductors NV if it’s brought to him again, the White House said in a statement Saturday.

The offer was part of an agreement struck by Xi and U.S. President Donald Trump over dinner on Saturday in Buenos Aires, where the pair negotiated a temporary cease-fire in the tit-for-tat trade war between the world’s two largest economies.

Xi told Trump “he is open to approving the previously unapproved Qualcomm-NXP deal should it again be presented to him,” White House Spokeswoman Sarah Huckabee Sanders said in the statement.

The U.S. mentioned the Qualcomm-NXP deal in the statement it put out following the Xi-Trump meeting. The Chinese statement, however, made no mention of it, according to a Bloomberg comparison of the two statements.

Qualcomm scrapped its proposed $44 billion bid for rival chip-maker NXP in July after an almost two-year wait for approval, as tensions between the U.S. and China escalated. Chinese regulators declined to clear the deal, though the country later expressed regret over the transaction’s collapse.

At the time, the abortive takeover was the highest-profile victim of a dispute between the world’s two largest economies about their ballooning trade imbalance, a spat fueled by concerns about China’s ascendancy.

A Qualcomm representative didn’t immediately respond to a request for comment.

By allowing the Qualcomm deal to run itself out, Beijing was seen to be flexing its economic muscles while retaining negotiating power with a Trump administration that has threatened to slap tariffs on virtually all Chinese imports.

Since then, Qualcomm has paid the $2 billion breakup fee owed to NXP and embarked on an accelerated share repurchase program. It spent $22.6 billion on buying its own stock in the 12-months ended September, using up cash reserves that had been intended for the NXP acquisition.