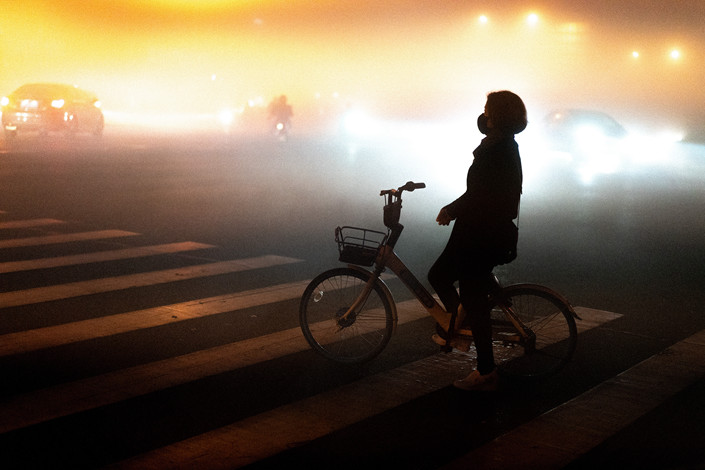 Shanghai issued a smog advisory on Nov. 27, when visibility was less than 5 meters (16.4 feet). Photo: VCG

Four bouts of heavy pollution in November have left residents of Beijing, Tianjin and surrounding Hebei province wondering what happened to the blue skies they had last winter.

After entering the heating season, which lasts roughly from mid-November through March, it is estimated that sulfur dioxide emissions in Beijing, Tianjin and Hebei increased by nearly half, and PM2.5 increased about 30%.

There are generally two major causes of heavy pollution: emissions from industry, vehicles, and coal-burning — and weather patterns. And it appears that the weather is the source of the problem.

China has been waging a war against smog for years, gradually implementing stricter cuts on industry outputs and last year imposing strict blanket bans to curb industry emissions. Last year, the Ministry of Ecology and Environment enforced a ban on the use of coal in households across 28 cities in northern China, requiring them to switch to electricity or liquefied natural gas (LNG) for heating.

When northern China managed to hit its pollution reduction targets last year, the ministry admitted that favorable weather conditions accounted for about a third of the drop in PM2.5, though Greenpeace estimated the weather could have contributed as much as half.

Earlier this year, China’s environment ministry revised its pollution action plan for the 2018-19 period spanning October to March. In a major change, it abandoned the one-size-fits-all approach to production cuts and blanket bans directed by the central government, giving authorities further down the chain the power to determine which enterprises and industries would face production caps.

Emissions from industry and heating are the main source of pollution in winter, smog analysis shows. There are two ways to reduce pollutant emissions in industry: One is to limit production, reducing output, and the second is to upgrade the equipment to environmentally friendly alternatives that emit less.

This year, Hebei implemented differentiated production caps and limits pegged to the environmental protection score of each individual enterprise and industry. It also implemented far-stricter emissions caps for the steel industry.

Additionally, fewer households are now burning coal, which is one of the major contributors of hazardous, ultrafine particulate matter that can penetrate into the human brain. In 2017, Hebei’s coal-to-gas and coal-to-electricity projects successfully switched 2.5 million households away from using coal, drastically reducing pollution. In 2018, another 1.8 million households switched to either coal or LNG for their heating.

Despite all of this, Beijing saw its worst pollution in 18 months on Nov. 26, with the concentration of PM2.5 particles passing 330 on the U.S. Embassy’s air quality index — a reading that is classified as “hazardous.”

Since November, the East Asian winter monsoon — a weather pattern that causes dry and cold air and strong winds across Mongolia, northern China, and the Korean Peninsula — has been relatively weak. It has brought just three cold fronts, which help to disperse pollution, compared with seven over the same period last year. In November, the average wind speed in Beijing, Tianjin and Hebei was 20% slower than the average for the same period last year. Additionally, humidity has been 10% to 25% higher in parts of Beijing, Tianjin and Hebei, which also contributes to higher pollution levels.

According to Peng Yingdeng, a researcher at the National Urban Environment Pollution Control and Technology Research Center at the Chinese Academy of Sciences, it will be a long time before smog levels are not subject to such a great extent to the whims of the weather.

“We can’t change the situation of smog due to adverse weather conditions in winter for the time being,” he said. “People shouldn’t be holding any illusions about this.”