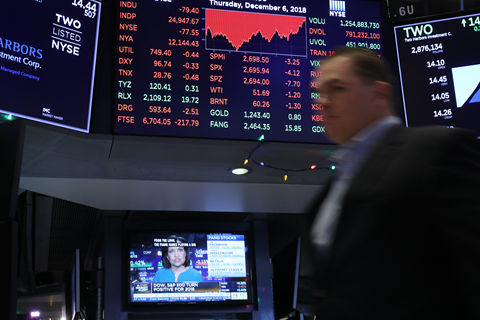 Stocks of Huawei Technologies Co.’s U.S. suppliers plunged Thursday on reports that the Chinese telecom equipment giant’s chief financial officer (CFO) had been arrested in Canada, but were recovering in after-hours trading.

NeoPhotonics Corp., a California-based manufacturer of semiconductor products, saw its shares dive over 16%. According to Bloomberg News, the company derives 47% of its revenue from Huawei. Shares of Inphi Corp., another California-based semiconductor company that gets about 14% of its revenue from Huawei, plunged over 9%. Shares of Broadcom Inc., which sells chips to Huawei, dropped 2.07%. Shares Qualcomm Inc., another Huawei chip supplier, dropped as low as 2.5% in intraday trading but ended the day unchanged. Shares of NeoPhotonics, Inphi and Broadcom all were rebounding in after-hours trading.

Meng Wanzhou, Huawei’s CFO and a vice chairman — and the daughter of Huawei founder and President Ren Zhengfei — was arrested in Vancouver while changing planes on Saturday. The arrest was made on a U.S. request, said Ian McLeod, a spokesman for Canada’s Department of Justice.

Canadian authorities didn’t give a reason for the arrest, citing a publication ban requested by Meng. The Toronto-based Globe and Mail newspaper had reported that her arrest was related to the U.S. investigation into Huawei over possible violation of sanctions against Iran.

Meng is set to appear in court Friday for a bail hearing. McLeod said she was “sought for extradition by the United States.”

In a statement released on Twitter on Wednesday, Huawei said it is unaware of any wrongdoing by Meng, who faces “unspecified charges” in New York. The company added that it complies with all laws and regulations where it operates, including export control and sanctions laws of the U.S.

The New York Times reported that prosecutors in the Eastern District of New York took on the case of Huawei’s investigation, citing an anonymous official.

Huawei is the second Chinese company targeted by the U.S. over dealings with Iran. Chinese smartphone-maker ZTE Corp. was nearly driven out of business last year when Washington barred it from buying U.S. technology over sale of banned U.S. equipment to Iran. ZTE eventually agreed to pay a $1.2 billion fine to get the ban lifted.

Britain’s BT Group said it was removing Huawei equipment from key areas of its 4G networks after concerns were raised about the Chinese company’s involvement in the U.K.’s telecom infrastructure.

Governments in New Zealand and Australia have also moved to block the use of Huawei equipment in their 5G networks.