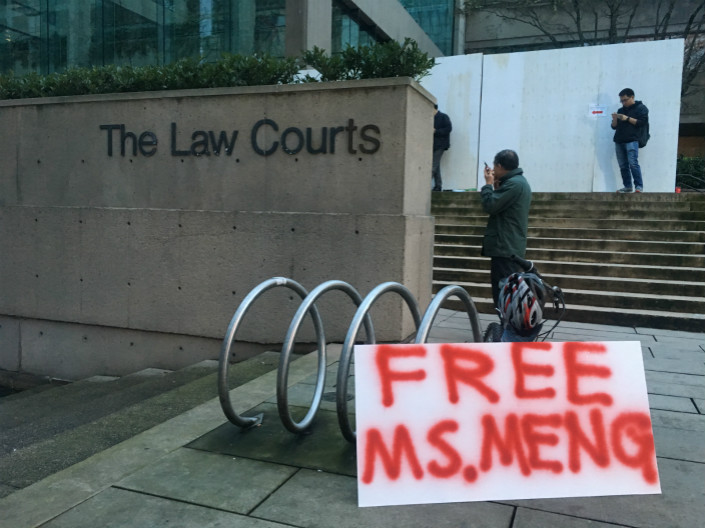 (Vancouver, British Columbia) — The second day of a hearing on the bail application from telecom giant Huawei Technologies’ CFO, who faces fraud charges in America, ended on Monday without a decision in Canada’s Supreme Court of British Columbia.

The bail hearing will resume Tuesday morning to determine whether Meng Wanzhou can be released on bail as Washington tries to extradite her to the U.S. for trial. Signs that she could be released on bail emerged at the Monday hearing when Crown Counsel and the defense attorney went into details of bail conditions, including the total value of the bail collateral.

Meng, who is also daughter of Huawei’s founder, was arrested in Canada on Dec. 1 on suspicion of fraud involving alleged violations of U.S. sanctions against Iran. At the time she was using a Chinese passport to change flights in Vancouver International Airport en route from Hong Kong to Mexico. The U.S. Justice Department is fighting for her extradition for a trial in New York, following a years-long investigation into her company’s business activities in Iran.

Justice William Ehrcke said it could take “many months or even many years” if there is an extradition hearing. The U.S. has 60 days to formally request an extradition, though it has made no such request yet.

During the hearing’s second day Gibb-Carsley went over exhibits submitted by Meng’s defense team. He argued that her long-ago expired permanent resident card and British Columbia identification card, combined with no letters of reference from any Canadians proved she has no meaningful connection to Canada.

Meng, 46, was in good spirits during the hearing, with her Mandarin interpreter next to her also in the glass enclosure, the highest security classification in a Canadian court. She wore a dark green prison sweatsuit, with her husband sitting in the middle of the front row in the audience behind the enclosure.

Gibb-Carsley said Meng had not visited the U.S. since early 2017, indicating that she was deliberately avoiding the country due to the fraud investigation since she had made previous frequent visits.

Meng’s attorney David Martin rejected the claim, saying that there was no need for Meng to visit America because the U.S. did not want to do business with Huawei. He argued that his client should be granted bail because of her good character and dignity. “She is deeply respectful of the rule of law… has a completely unblemished record,” Martin said.

The total value of the proposed bail collateral was Can$15 million ($11 million), consisting of two houses in Meng’s husband’s name and a large cash deposit of Can$1 million. Her husband would become her community surety.

The bail proposal also included electronic monitoring and a zone of surveillance that would allow Meng to travel within Richmond and Vancouver.

A security team would include one security driver and two security officers on three eight-hour shifts, equipped with one security vehicle. Technical devices would be deployed, said Scott Filer, CEO of Lions Gate Risk Management Group, one of the two companies proposed to undertake the surveillance.

Monitoring arrangements would include a GPS tracker and curfews by creating restricted zones during certain hours of the day. Breaches would alert within five to 15 minutes depending on the breach, said Filer, a former RCMP staff sergeant with three decades of related experience.

Meng would live in the house in the name of her husband on West 28th Avenue, Vancouver, which was broken into at 5: 30 am on Sunday. The identity and motive of the burglar have remained unclear.

Filer testified that he had visited the house on Vancouver’s west side, and that it would be an appropriate place for a person out on bail to reside.

The other expert witness Stephen Tan, co-founder of Recovery Science, a company specializing in electronic surveillance technologies, said that his company has roughly 114 monitoring cases currently active. The company uses a GPS chip and a SIM card to provide minute-by-minute updates on a person on bail.

In Meng’s case, Tan told the court, surveillance would take place round the clock and account for any curfews by creating zones of restriction during certain hours of the day.

Meng will foot the surveillance costs, her attorney said.

The courtroom was packed last Friday and on Monday with a mostly Chinese audience. About 100 viewers followed the hearing closely via live broadcasts on three monitors in courtroom’s corridor in downtown Vancouver.

China pressured Canada and the United States for the immediate release of Meng after her arrest.

Meanwhile, an editorial in the People’s Daily, the official newspaper of the Chinese Communist Party, said that “only by correcting its mistake, immediately ending its violation of a Chinese citizen’s lawful and legitimate rights and giving the Chinese people a due explanation, can Canada avoid paying a heavy price.”

Canadian Prime Minister Justin Trudeau has sought to distance himself from the proceedings, saying that he was not directly involved and that it is a judicial rather than government matter.

Meng’s arrest, which took place on the day when Chinese President Xi Jinping and U.S. President Donald Trump met in Argentina during the G20 summit, has also cast a shadow over a fragile three-month truce in the China-U.S. trade war.