Opinion: What If the Huawei CFO Was Flying Through Sydney? 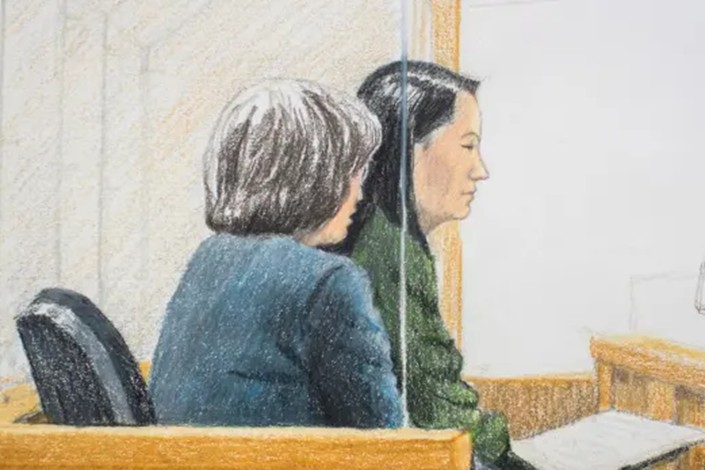 In this courtroom sketch, Meng Wanzhou, right, the chief financial officer of Huawei, sits beside a translator during a bail hearing at British Columbia Supreme Court in Vancouver. Photo: Jane Wolsak

(AFR) — Imagine if Meng Wanzhou's route from Hong Kong to Mexico had been via Sydney rather than Vancouver! The Australian government may insist it doesn't have to choose between its major trading partner and its major security partner. As tensions increase, that argument becomes less convincing.

Australia could easily have found itself in the same dilemma as Canada – with Beijing threatening “severe consequences” if the daughter of Huawei's founder, Ren Zhengfei, is not released.

Given this political drama is playing out in court, the Trudeau government has lost any discretion. The bail hearing will reconvene in Vancouver on Monday.

Canadian Prime Minister Justin Trudeau can merely insist his government did not play a role despite being informed a few days ahead of the pending detention of Huawei's chief financial officer during her brief stopover to change planes on December 1.

"I can assure everyone that we are a country [with] an independent judiciary," he said. "The appropriate authorities took the decisions in this case."

Canadian Foreign Minister Chrystia Freeland reiterated there was no political interference in the decision, saying the detention was handled at the "officials' level".

Well, yes. That hardly explains why Canadian officials didn't temporarily "lose" or delay the demand from the U.S. Department of Justice until it was a little too late. So sorry, Washington. Just a bureaucratic snafu, you understand.

Instead, Meng's arrest, only revealed on December 5, has dramatically personalized the increasing friction between the U.S. and China, including the likelihood of U.S. allies such as Australia and Canada being trapped in the crossfire.

"Canada has a strong and constructive relationship with China," Trudeau said, "and [we] will continue to work hard to improve economic ties."

That sort of work just got a lot harder. There's little ability for Huawei or China to distance themselves from the fracas given Meng's lineage and profile. So far, this has not derailed trade negotiations between the U.S. and China. But Xi Jinping will not want to have China publicly embarrassed with a prominent Chinese citizen hauled off to face American justice rather than the Chinese version. U.S. tech companies are suddenly nervous about any China visits by their executives.

The formal U.S. charges against Meng focus on alleged violations of international sanctions against trading with Iran via a Hong Kong-based subsidiary of Huawei. American authorities claim she misled banks about Huawei's involvement, meaning the banks cleared transactions that potentially violated sanctions, and a judge in a New York district court issued a warrant for her arrest in August. The U.S. is seeking her extradition to have her appear in federal court to face a potentially lengthy prison sentence.

But the informal context for the charges is a much broader U.S. campaign to dissuade allies from using Huawei telecommunications equipment in an increasingly digitally-connected world.

This effectively means the division of the telecommunications equipment world into two opposing camps — that of Huawei with its dominance in Asia and Africa and that of America and its closest allies. The U.S. is pressing friendly countries to resist the advance of the Chinese giant into Western networks, especially the new 5G mobile world where everything will be connected and therefore more vulnerable to cyber security risk.

Huawei is banned in the U.S. But that has not stopped the company becoming one of the world's biggest makers of smartphones and network equipment and key to China's ambitions as a technology superpower.

Australia blocked Chinese suppliers from any involvement in 5G back in August. The government cited national security risks, in part because it concluded it will no longer be possible to separate “core” networks transferring data and voice traffic from the supply of less sensitive equipment such as radio towers, base stations and antennae.

New Zealand followed suit late last month, with the U.S. arguing for this decision during the APEC meeting in Papua New Guinea.

Huawei disputes the inability to separate the core network from non-core equipment in the 5G world despite the much greater digital connectivity. Until recently, it was successful in persuading Britain, Canada and Japan of this given the relatively lower cost and high-quality of its equipment.

Huawei has worked closely with Canadian universities and with Bell Canada Inc. on trials and has about 600 of its 1,000 employees in Canada doing research on 5G, for example. But under pressure from the U.S., Canada is now saying Huawei's involvement in 5G is under review.

In Japan, there are regular though unconfirmed media reports the Abe government is about to block Huawei from 5G and government despite Japanese efforts to improve its relationship with China.

In Britain, Huawei has worked closely with BT Group PLC for 15 years, providing 80 per cent of its fixed line equipment although excluded from BT's core network. But after BT took over the mobile EE Ltd. business, Huawei equipment is being phased out from EE's mobile 4G core network.

Now Huawei involvement in Britain's 5G is also becoming contentious given warnings by security agencies and Huawei's dominance. In a statement, the company said it hoped Britain "will continue to provide Huawei with an equitable business environment."

Germany – where Huawei has a long relationship with Deutsche Telekom AG – opposes excluding specific manufacturers from its construction of 5G, according to its interior ministry.

But European Commission Vice President and head of technology, Andrus Ansip, says the EU should be worried about Huawei and other Chinese technology companies because of the risk they pose to industry and security.

Think of it as a major crash between digital technology, cybersecurity and power politics. Casualties are mounting.