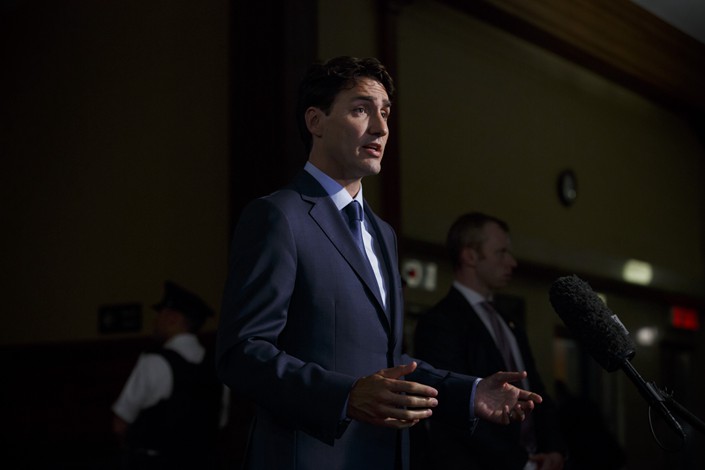 Canadian Prime Minister Justin Trudeau is under pressure over the arrest of a Huawei executive. Photo: Bloomberg

(Bloomberg) — The arrest of a Huawei executive on Canadian soil represents another setback to Canadian Prime Minister Justin Trudeau’s push for stronger ties with Beijing, which are already strained by differences over trade and investments.

Canada arrested Huawei Technologies Co. Ltd. Chief Financial Officer Meng Wanzhou on Saturday in Vancouver as she was switching flights in the Pacific coast city. The arrest was made at the request of U.S. authorities, who want to extradite her. The arrest comes amid a probe of suspected violations of Iran trade sanctions.

China quickly lashed out at the Canadian move, saying it “firmly opposes” and “strongly protests” the arrest of Meng, according to a statement from the Chinese embassy in Ottawa late Wednesday.

Trudeau distanced himself from the arrest Thursday, saying he was informed of the move a few days prior but wasn’t directly involved and hasn’t spoken to Chinese officials about the matter.

“We are a country of an independent judiciary and the appropriate authorities took the decisions in this case without any political involvement or interference,” Trudeau told reporters in Montreal.

Though Canada was acting on a U.S. request, the arrest adds a further chill to China-Canada relations just as Trudeau seeks closer trade ties with Beijing after reaching a deal to replace the North American Free Trade Agreement.

“The pressure on Trudeau will ramp up, the Chinese will pull out all the stops on messaging,” said Gordon Houlden, director of the University of Alberta’s China Institute. Meng’s seniority and family connection will add fuel to the fire of Chinese reaction he said, placing Trudeau in a difficult position of either backing the U.S., backing China or attempting to stay neutral through a process run largely through courts. “The hands of the government are tied."

Trudeau likely had little choice but to accept the U.S. request given the extradition treaty signed by the two countries, said Robert Currie, a professor at Dalhousie University in Halifax, Nova Scotia who specializes in international law and extradition. Saying no “would have potentially opened Canada up to having broken international law,” Currie said.

Trudeau’s father Pierre established ties with China when he was prime minister in the 1970s, a legacy Xi Jinping has lauded. The current prime minister has also wooed China, to mixed effect. The launch of trade talks collapsed on his demands for progressive clauses that respect women’s rights among other things, and Canada riled China by rejecting a takeover of construction firm Aecon Group Inc. by a Chinese bidder. Meng’s arrest makes clear where Canada’s allegiances lie in the growing feud between China and the U.S.

Meng was arrested on Dec. 1, the same day that Xi and U.S. President Donald Trump held their bilateral meeting in Buenos Aires to hash out a fragile trade truce, the fate of which is less clear after her arrest.

Meng was arrested “when she was transferring flights in Canada,” Huawei said in a statement. “The company has been provided very little information regarding the charges and is not aware of any wrongdoing by Ms. Meng. The company believes the Canadian and U.S. legal systems will ultimately reach a just conclusion.”

Canada’s courts have restricted information about the case by issuing a publication ban, a relatively common practice in Canada. Meng’s hearing is scheduled for Friday in Vancouver.

Brian Fleming, a member of law firm Miller & Chevalier and former national security prosecutor at the U.S. Department of Justice, said he thinks the arrest will be the first of many.

“My sense is the investigation had ripened to a point where they were able to charge and arrest somebody potentially in a foreign country — so they took that opportunity,” he said in an interview. “I really view this as the tip of the iceberg. I think this is the first public acknowledgement and action taken with respect to this investigation. I have no doubt that there are other facets of this.”

No crackdown in Canada

Despite the arrest, Trudeau hasn’t cracked down on Huawei, unlike other countries. The Chinese firm supplies equipment to many of Canada’s telecommunications firms.

Canada has played a big role in Huawei’s research and commercialization efforts for high-speed 5G networks. Huawei is the third biggest supplier to Vancouver-based Telus Corp., one of Canada’s top three carriers, and the two companies partnered on a 5G pilot last year. Huawei has also worked with BCE Inc.’s Bell Canada on an “Internet of Things” pilot project.

Since coming to Canada in 2008, the company has expanded research facilities across Ottawa, Toronto and Waterloo, Ontario, and received tax credits for research and development spending from the federal government and three provinces. The company has invested millions in some of the country’s top universities to fund research that has helped it produce many patents and employs over 500 people in the country. It even sponsors a segment on Hockey Night in Canada, among the country’s most-watched programs on Saturday nights.

U.S. lawmakers have urged Trudeau to block Huawei from Canada’s development of a 5G high-speed network, arguing the ties to the Chinese state threaten to compromise the country’s security.

“Huawei is not a normal private-sector company,” Senators Marco Rubio and Mark Warner wrote in a letter to Trudeau in October.

Several allies have banned or effectively banned Huawei from advanced networks, including Australia and, just last month, New Zealand. U.K. Prime Minister Theresa May will soon have to make a decision on restricting Huawei. These nations, along with the U.S., make up the so-called Five Eyes, and share intelligence information.

Trudeau was asked about the issue during a press conference in August and said the country relies on its security agencies, including the Communications Security Establishment (CSE), and handles things on a case-by-case basis. He reiterated Thursday that he will follow the recommendation of his security advisers.

“We continue to ensure that we fulfill one of our fundamental responsibilities for Canadians, which is to keep people safe, and that doesn’t mean just physical security now, it also means cyber security,” Trudeau told reporters in Nanaimo, British Columbia. “We always work with them and work with partners, like our Five Eyes partners and others, to look at what new steps we can take.”

However, Scott Jones, CSE’s deputy chief of information technology security, downplayed fears about Huawei when speaking to lawmakers in September. The agency prefers to “defend against all forms of cyber-risk,” he said in response to one of several questions about Huawei. “It’s really trying to address all of the risks and not just one specific one.”