China Aims to Double Its Number of Airports 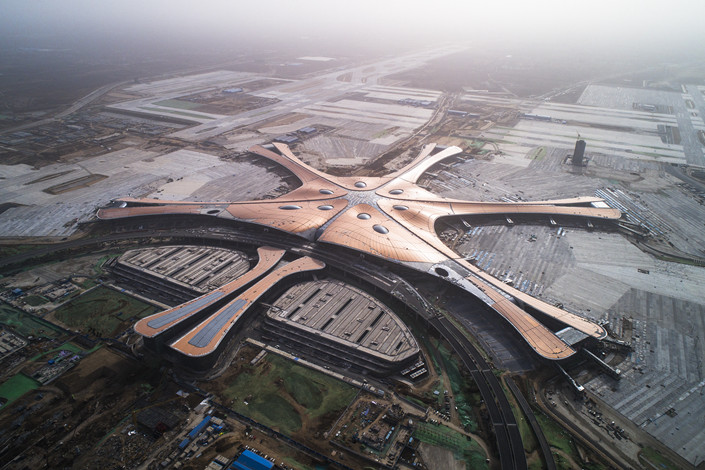 Beijing Daxing International Airport on Dec. 2, 2018. Photo: VCG
China’s aviation regulator is aiming to almost double the number of airports in the country to 450 by 2035, with analysts expecting air travel in smaller cities to take off.

A major infrastructure spending binge over the last decade saw runways laid down for 234 airports across the country. But many major cities’ airports are already packed to capacity, before the industry even reaches cruising altitude, with DBS Group Research expecting 1.5 billion people in the country to take at least one flight per year by 2036 on the back of rising wealth.

The China Aviation Administration has this growth on its radar, and announced its aim to increase the number of airports in a new industry plan released this week.

“Building a strong civil aviation country is not only an objective requirement for… meeting the people's living needs,” but is also, “an inherent requirement for deepening the structural reform of the supply side of civil aviation,” the plan explains. While vague, the plan suggests a greater role for the private sector in the industry.

The plan comes as the government switches gears on infrastructure spending, with growth in investment falling to historic lows during the first nine months of the year before picking up in October. It may also presage major fiscal stimulus as the government faces a slowing economy, with ING Bank expecting 9 trillion yuan ($1.3 trillion) to be pumped into infrastructure between now and 2020.

The capital’s air capacity will receive a major boost when the biggest airport in the world, Beijing Daxing International Airport, opens next year. Last month the government also announced a 21.11 billion yuan expansion of Urumqi airport in Northwest China, capitalizing on its growing importance as a gateway for flights to central Asia. Major hubs in the metropolises of Guangzhou, Shanghai and Shenzhen are also likely to see upgrades.

Yet the new round of airport building will mostly benefit smaller third- and fourth-tier cities, which are currently underserved by air transport, said Jeff Yu, a specialist in transportation logistics at consultancy Roland Berger. “China’s most obvious point of comparison is with the U.S., which has roughly the same land area but is served with far more flight connections,” he said. The U.S. has 789 medium to large civilian airports, according to travel site icu.com. “Now the plan is to make flying a more affordable and common form of travel for more people.”

This will also encourage greater competition in the industry, Yu said. At present, the country’s “big three” state-owned airlines - Air China, China Southern Airlines and China Eastern Airlines - dominate 71% of the market. While they will invest in the new smaller airports, the new plans should open more market share up for smaller companies.

“In the U.S. and Europe larger airlines that control major air travel hubs usually enter ‘capacity procurement agreements’ with smaller airlines who then ‘feed in’ to them for long-haul flights, such as for international travel,” Yu said. “It is likely that the same pattern will form in China as it tends to be more cost-effective,” he said.

At present a major obstacle is that only 30% of China’s airspace is open to airlines, with the majority controlled by the military, for training and drills. Unexpected military-related disruptions to flight paths are thought to be the reason that Chinese airports regularly rank as the most delayed in the world.

Yet Yu said the authorities are aware of this, and the situation will improve in tandem with more airports being built. “In the future there will be more efficient coordination on usage of flight paths, and more of the sky is going to be opened to civil aviation,” he said.