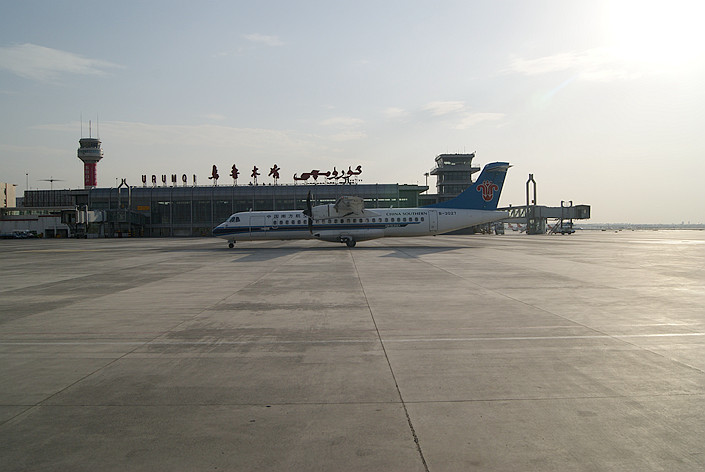 China’s top state planner has approved a 42.11 billion yuan ($6.06 billion) expansion of Urumqi’s airport in Northwest China’s Xinjiang Uygur autonomous region, as the government looks to transform the airport from a regional flight hub to one of international significance.

The development will see Urumqi Diwopu International Airport handling 63 million passengers a year when the expansion is completed in 2030, up from around 15 million passengers now, according to documents published by the National Development and Reform Commission on Monday.

Urumqi’s airport has already benefited substantially from China’s growing links with Central Asian countries as part of the “New Silk Road,” the overland development aspect of China’s Belt and Road Initiative, which aims to develop China’s infrastructure and trade links along historical trade routes. Passenger numbers increased by over 10% a year between 2010 and 2015, beyond the intended capacity of 15 million, leading to the proposed expansion.

“Urumqi’s geographical advantage is very unique,” an airport representative told Caixin. “There are many solo routes to Central Asia and West Asia, and many routes within Xinjiang also need to transit through Urumqi, which is very suitable for creating a regional hub.”

Xinjiang also saw 100 million domestic and foreign tourists in 2017, an increase of about a third from a year earlier, according to Reuters.

The airport’s runway currently is too short for the Airbus A380 passenger plane, the world’s largest passenger jetliner, which is used for long-distance international flights. The two new runways will be large enough for the jetliner, and that should increase the number of connections for China Southern Airlines, which currently uses the airport as a hub, an industry analyst said.

The project is part of a wider government push to develop in Xinjiang, the biggest of China’s provincial-level regions by area but one of the poorest in terms of gross domestic product. In June, state oil giant China National Petroleum Corp. announced it will invest a further 150 billion yuan in developing its oil and gas operations there over the next three years.

The approval also appears aimed at showing the government’s commitment to ramping up infrastructure development across the country after infrastructure spending growth fell to a record low of 4.2% year-on-year from January to August. Growth pickup in October marked its first rebound of this year after the government made several commitments to ramp up spending.