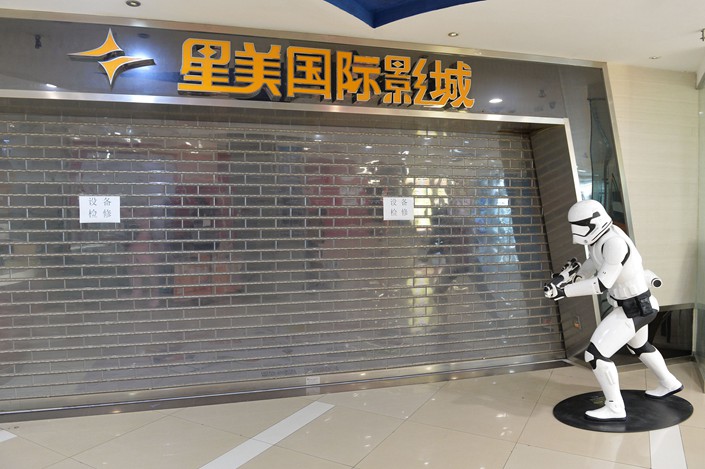 The door to a Stellar International Cineplex is closed in the northern city of Tianjin on Sept. 6. Photo: VCG

After months of speculation, a major Chinese cinema chain has been forced to come clean on debts of at least $60 million in unpaid wages and rent, and to close 140 cinemas.

The revelation by SMI Holdings Group Ltd. stoked concerns about the furious expansion of the cinema market over the past few years that has seen China become home to the largest number of screens of any nation.

Analysts downplayed the fears, saying companies should be well equipped with strong know-how and sufficient liquidity in an industry that is capital intensive and rapidly expanding.

In a filing to the Hong Kong Stock Exchange on Dec. 6, SMI said it owed “several employees” salaries amounting to HK$108 million ($13.8 million) at the end of November.

It also had outstanding rent for its cinema sites of over HK$200 million, with another 150 million yuan ($21.7 million) in unsettled licensing fees for film distributors.

Around 140 of its 320 cinemas have had their operations suspended while 11 others could be foreclosed upon to repay debts, the filing said.

The disclosure marked a U-turn from a company statement on Nov. 22, when SMI denied media reports that it owed wages.

“It’s inaccurate slander to say that our staff in the Hong Kong headquarters have not been paid for three to four months … we always put the interests of our employees and social responsibility first,” the statement said (link in Chinese).

Cinema operations require large amounts of capital, and it can take a long time for them to see a return on their investments, said Lionel Fu, an analyst with industry tracker EntGroup. “The business profitability isn’t lucrative and operators must make sure of sufficient funding to keep their business afloat,” he said.

As China, the world’s second-largest box office market, looks set to soon overtake North America, a flurry of cinema operators have jumped on the bandwagon in recent years.

The market is able to add more screens because China only had around 62 screens for every million people at the end of 2017, compared with 120 screens in North America. Chinese people each watched an average of two films at the cinema last year, while their North American peers saw 3.5 titles in the same period, Fu said.

Xin Zhang, a London-based analyst with consultancy IHS Markit who tracks the Chinese film and cinema industries, doesn’t foresee consolidation in the cinema sector, at least for now.

“However, it is very likely to happen in a long run, as the market (is) getting more mature,” Xin told Caixin. She added that when building new cinemas becomes more competitive in the future, investors will require mergers and acquisitions to seek growth.

SMI, which suspended trading in September, said last week it had reached a settlement plan with movie suppliers after “active negotiations,” and its title supply had been stable.