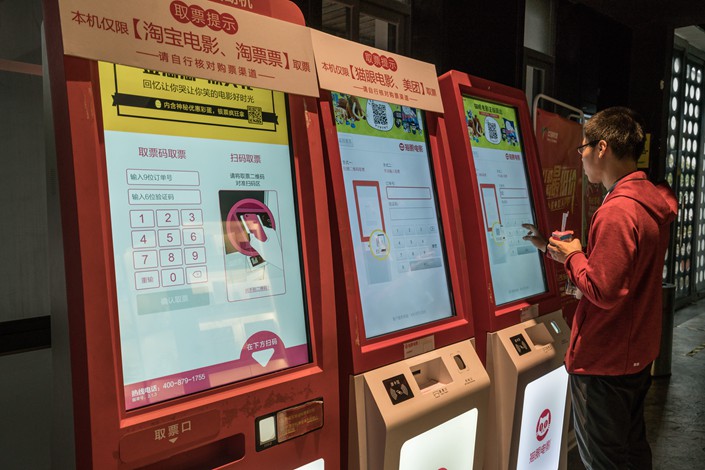 A moviegoers picks up his tickets at a self-service ticket kiosk at a cinema in Fuzhou, Fujian province, in January 2017. Photo: IC

In its harshest crackdown on the movie industry in years, China’s top film regulator has signaled it will ban companies from subsidizing online movie-ticket sales.

The authorities met with major movie theater chains last week, including those under Dalian Wanda Group and the state-owned China Film Group Corp., to inform them of upcoming policy changes, including the prohibition of subsidies, several sources familiar with the matter told Caixin.

Subsidizing moviegoers has been a common tactic to boost box-office figures for years, leading to ticket prices often less than 10 yuan ($1.46). The cash either came from online ticketing platforms, which since its launch a few years ago have sought to change moviegoers’ habits and beat out their rivals; or from distributors and producers keen to inflate box office numbers to impress investors.

The practice has helped drive China’s explosive box-office growth, which saw Chinese box offices overtake North America’s to lead the globe earlier this year, but it has also distorted the film industry’s and consumers’ choices.

Other new policies mentioned by the authorities — including the film division of the State Administration of Press, Publication, Radio, Film and Television — at the meeting included a cap on service charges issued by third-party ticket sellers to 2 yuan per admission.

No official document regarding the new policies has been issued to clarify the timeline or other details.

Distributors of certain films have spent tens of millions of yuan on ticket subsidies, which has made the competition “barbaric” and turned box-office revenues into “bubbles,” a film marketing professional told Caixin.

Online ticketing platforms have competed for market share using subsidies since 2014. After years of competition, the market is now dominated by Alibaba Group Holding Ltd.’s Tao Piao Piao, and Tencent Holdings Ltd.’s Maoyan. The two platforms together had more than 90% of the market share during February’s Lunar New Year holiday, the busiest time of year for the country’s cinemas, according to Beijing-based BigData Research.

Maoyan, which has recently filed for an initial public offering in Hong Kong under the name of Entertainment Plus, said its marketing expenses grew 60% to 1.1 billion yuan in the first six months of 2018, although a management-level company employee told Caixin previously that the platform ceased to offer subsidies in 2016.

A manager at Tao Piao Piao told Caixin that the ban will encourage the film industry to shift its focus back to content, and that his employer won’t be affected too much because it is not only a ticketing platform, but also involved in film distribution and data analysis.