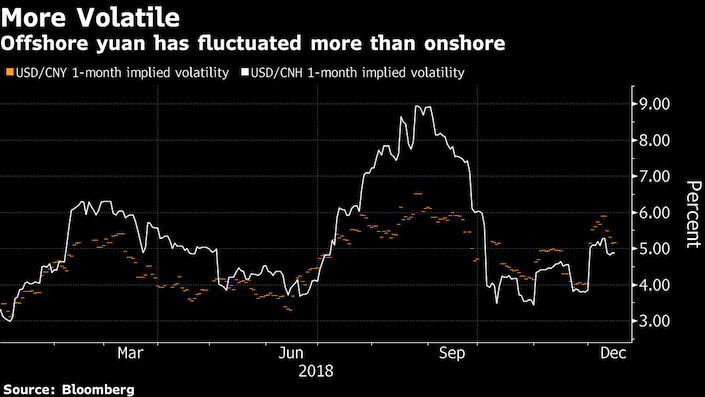 China’s exchange rate is likely to get more volatile in time as the country pushes greater international use of the yuan, according to Goldman Sachs Group Inc.

While the yuan-internationalization campaign hit a setback as China tightened regulation of capital flows in the wake of a messy 2015 devaluation, there’s increasing pressure for policy makers to take up the initiative again, economists including MK Tang wrote in a note Monday.

China’s current account will tip into deficit in coming years, in the view of many strategists, as its increasingly large economy continues to grow faster than the rest of the world. In financing that deficit, China could reduce risks if it acquired funding in its own currency -- much like the U.S. does now, and unlike more vulnerable countries such as Brazil, Goldman noted.

By reducing reliance on the dollar, China could also avoid the kind of vulnerability Russia has faced with U.S. sanctions on its companies, it said.

“After a brief hiatus in the last couple of years, global promotion of the RMB will likely be supported with a greater sense of urgency,” the team wrote. The RMB refers to the renminbi, an official name for China’s currency.

One occurrence that’s likely to come is a convergence between the yuan traded offshore, known as CNH, and that traded onshore, known as CNY, the economists argued. Their analysis of discrepancies between the two suggested that yuan volatility would be “much closer to that of other major currencies” once exchange-rate controls were eased.

“A truly global currency is one whose worth should be essentially indifferent to country boundaries,” the Goldman economists wrote. “Should CNY’s fluctuations one day indeed become as large as those of other major currencies, it may also significantly push up the volatility of the other Asian” emerging-market currencies, they added.

Up to now, Asian exchange rates have tended to fluctuate less than other emerging nation currencies, possibly because the yuan has played an “anchor” role, Goldman said.

Related: It Has Been a Bad Year for the Yuan. 2019 Could Be Worse