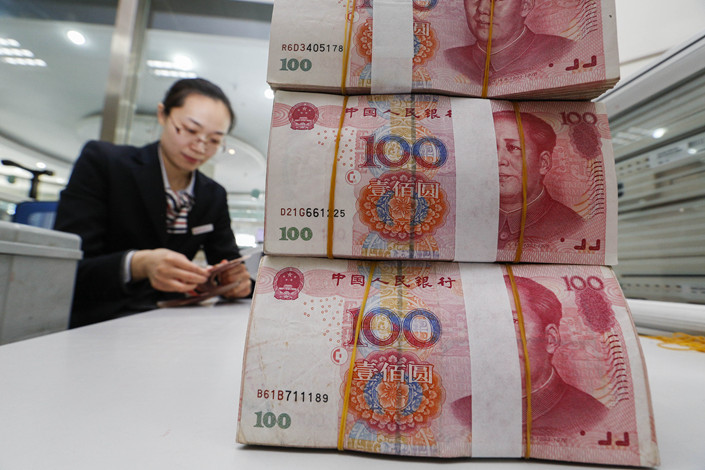 *2018 has been a tough year for the yuan and there is little expectation it will strengthen significantly in 2019. Instead debate is focused on how much weaker it will get

* Most analysts agree that the yuan will slip past the 7-per-dollar barrier at some point in 2019. This will be a tense moment — investors worry that a rapidly weakening yuan could slip into a vicious cycle

It’s been a bad year for most emerging market currencies. China’s yuan wasn’t the worst performer — that prize probably goes to Argentina’s peso — but it still hit a 10-year low against the U.S. dollar in October. The currency has recovered slightly since then, but is still hovering perilously close to a key psychological barrier of 7 yuan per dollar.

Just over two weeks are left of the year, so analysts are now looking to 2019. With most of the factors that pressured the currency this year still hanging around, there’s little expectation the yuan will strengthen significantly. Most debate is instead on how much weaker it might get. Trade war negotiations, China’s slowing growth, and the U.S. Federal Reserve are seen as the key factors that will determine the fate of the currency over the next 12 months.

Most analysts agree that the yuan, also called the renminbi (RMB), will slip past the 7-per-dollar barrier at some point in 2019. This will be a tense moment — investors worry that a rapidly weakening yuan could slip into a vicious cycle. If it slips across the 7-per-dollar line too quickly, concerned traders will probably sell more yuan, putting even more pressure on the currency. Wealthy individuals and businesses might try to pull their money or assets out of China before they lose even more value — dragging down the yuan further.

Fickle investor sentiment is a key driver of these fears, as “the 7.0 level carries no significance on its own other than representing how many RMB you could purchase with one U.S. dollar,” noted J.P. Morgan Asset Management’s Hannah Anderson.

But China’s central bank will probably be able to bring the yuan over the 7-per-dollar barrier safely, said analysts from CEBM Group, a subsidiary of Caixin Insight Group, who think it could happen in the first half of 2019. The People’s Bank of China (PBOC) has strong controls over capital outflows, and this year has tightened its control over the parity rate, which sets the daily range within which the yuan can trade, and has also made it more costly to short the yuan. China also has $3 trillion of foreign reserves — the biggest such hoard in the world — that it can use to buy up yuan in order to support the currency.

The one big thing that could force a faster weakening than the PBOC wants is China’s ongoing trade war with the U.S., CEBM said. The two countries’ strained relationship this year has been a strong driver of shifts in the value of the yuan. There’s currently something of a truce — during which the currency is unlikely to weaken past 7 per dollar, according to a recent report from Nomura International — but tariffs are set to increase on March 1 unless the two sides hash out a deal before then.

A weaker yuan would be a win for Chinese exporters, whose goods would become cheaper and so more attractive to foreign buyers — but if the yuan dropped too fast, this advantage could sour relations with the U.S. even more. President Donald Trump has already accused China of weaponizing its currency in this way, although an October U.S. Treasury report chose not to.

“China is sensitive to U.S. pressure on the currency and wants to avoid any potential conflict in the financial area,” said Wang, who expects the yuan to depreciate to around 7.5 per dollar by the end of 2019 if negotiations fail and the threatened tariffs of 25% or higher are imposed on all Chinese exports to the U.S.

Most analysts agree a cool-down in tensions could bolster the currency though. This could keep the yuan around 7 per dollar in 2019, Wang said.

Currencies are only weak compared to other currencies. The dollar’s strong 2018, on the back of a string of interest rate hikes by the U.S. Federal Reserve, fast U.S. growth and major tax cuts implemented by the Trump Administration, has been one of the biggest pressures on the yuan this year.

The Fed has raised interest rates every quarter since December 2017, but to avoid increasing the cost of borrowing as growth slows, the PBOC has not kept pace. This means spreads between the cost of U.S. and Chinese government debt have narrowed, contributing to less demand for the Chinese currency, and so a weaker yuan.

Another Fed hike is likely later in December, narrowing the gap further. But though further hikes are predicted for 2019, there are signs the Fed may be changing its mind amid tightening financial conditions and a global slowdown. The Fed is likely to stop its rate hikes in mid-2019, lending some strength to the yuan in the second half of the year, according to CEBM.

“We see little impetus for further dollar strength given a relatively high valuation and few attributes that differentiate US assets from the rest of the world,” said a report from BlackRock Investment Institute.

More Fed rate hikes than markets expect could push it up, however, the report said.

China’s slowing economic growth is also seen as a broader drag on its currency. Gross domestic product (GDP) growth dropped to 6.5% in the third quarter from 6.7% in the second quarter. The IMF forecasts China’s annual GDP to grow by 6.2% in 2019, down from a forecasted 6.6% growth for the whole of this year. Analysts from Nomura expect China’s macro data to weaken significantly into the second quarter, pushing the yuan past 7 and toward 7.2 per dollar.

“The RMB is acting as a release valve for investor sentiment around China — both from on and offshore,” noted J.P. Morgan’s Anderson, saying that slowing growth and China’s badly performing stock market have both encouraged selling of the yuan.