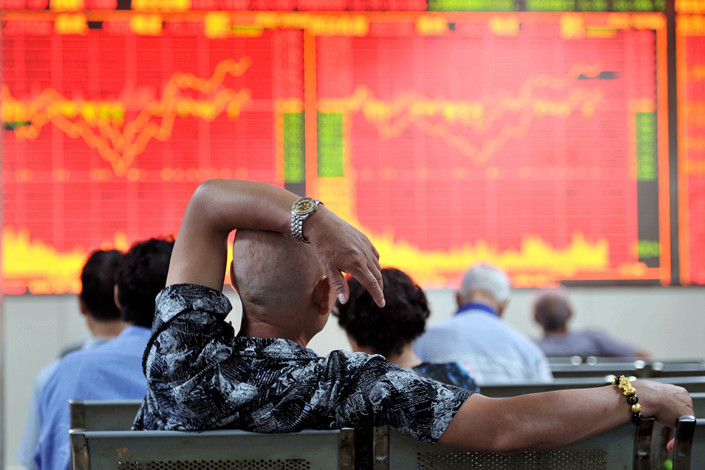 Pessimism has ruled over domestic investors this year as concerns have mounted over slowing economic growth and the intensifying trade war with the U.S. Photo: VCG

China’s stock markets have been in the dog house this year and are set to be among the world’s worst performers of 2018 — the benchmark Shanghai Composite Index has dropped almost 22% as of Dec. 11, more than any other major stock index, and is set for its biggest annual slump since the Global Financial Crisis in 2008.

Pessimism has ruled over domestic investors this year as concerns have mounted over slowing economic growth and the intensifying trade war with the U.S. The government’s campaign to rein in financial risks has also hurt the market, squeezing liquidity and forcing many big shareholders to sell stakes they had pledged to get loans.

Many analysts are predicting the stock market’s fortunes will turn for the better in 2019, the Year of the Pig, as sentiment improves on the back of more policy support for the economy and a loosening of the tight liquidity conditions that exacerbated the downturn in 2018. But others are more cautious about the outlook, saying they can see no catalyst that could turn around market sentiment as economic growth will likely fail to rebound strongly and the trade dispute drags on.

In the optimists’ camp is Shi Bin, Head of China Equities at UBS Asset Management Co. Ltd. who, as far back as October, said it was time to turn positive on China equities, noting that a turning point had been reached in both government policy and the outlook for the stock market.

“We took a very cautious view on the market in the first three quarters of 2018, mainly because of the government’s tough deleveraging and regulatory policies, as well as the U.S.-China trade dispute,” Shi said in comments published on Nov. 8. “But looking at a series of recent policy statements and news announcements, we believe there has been a significant change in the Chinese government’s attitude which means both targeted support for the economy and the possibility of a compromise on U.S.-China trade issues.”

Shi said that policy turning points are usually ahead of changes in the market because it takes time for policy changes to have a noticeable effect on the economy.

“We expect that economic fundamentals will bottom early next year and that the impacts of both recent and forthcoming policy changes will be felt soon after, with a likely improvement in sentiment and an upturn in the Chinese equity market.”

The market has already started to stabilize since the government began a concerted effort on Oct. 19 to restore market confidence, which included a coordinated set of interviews and statements from Vice Premier Liu He and the heads of the three financial regulators. Since its low of 2,486 on Oct. 18, the Shanghai Composite Index has recovered some ground, rising to as high as 2,703 in mid-November. It closed at 2,594 on Tuesday.

Analysts from domestic securities firms are also turning upbeat about prospects for 2019. Citic Securities Co. Ltd., the largest brokerage in China by assets, estimates some 430 billion yuan will flow into the A-share market throughout 2019, including money from foreign investors, who are being given greater access to the Chinese market; from insurance companies, who have been allowed to invest more of their assets directly in stocks; and from rescue funds set up to defuse the pledged-shares crisis, which created fears that stock pledged as collateral for loans by major shareholders would be dumped onto the market by creditors.

Citic also predicted that the second half of 2019 will be the starting point for a three- to five-year bull run driven by structural reform of state-owned enterprises, a pick-up in corporate earnings, and more clarity on China’s trade policy after the annual meeting of the National People’s Congress in March and the end of the 90-day truce in the trade war.

But in the other camp, the pessimists say it’s too early to call a recovery in the stock market. They point to a lack of clarity over the direction of company profits and progress in resolving the U.S. trade dispute. There’s also concern about the weakness in macroeconomic data and the lack of movement in pushing ahead with needed domestic reforms.

The Shanghai Composite Index is likely to trade in a range of just under 2,000 to 2,900 in 2019, with a median level of around 2,350, says Hong Hao, Head of Research and Strategy at BoCom International Securities Ltd., who accurately predicted the mid-June 2015 market crash and a flat market performance in 2017.

“While the market has reached its bottom range, its recovery will be hampered by overseas volatility — most notably from the U.S.,” he wrote in a report in November.

“The lower end of just under 2,000 anticipates a worsening trade war that is the risk case,” he wrote. “Bottoming is a process rather than a point. Historically, the bottom in Chinese stocks can stretch out for well over a year.”

Although China’s economic cycle is approaching a trough in the coming months, a strong recovery will be elusive, Hao said. The government has some leeway to implement stimulus, but it will be less effective and hampered by high leverage in the system — including households, local governments and private companies.

The consensus among analysts is that the economic slowdown, along with the trade war and its near-term impact on the economy are largely priced into the domestic stock market, barring a marked turn for the worse in 2019. Even so, headline-grabbing news on the trade front still have the potential to cause big swings in investor sentiment.

But domestic factors — investment, business confidence, and monetary policy — are likely to have a bigger impact on the stock market in 2019, according to Zhu Chaoping, global market strategist at J.P. Morgan Asset Management in Shanghai.

There are two policies in particular to watch out for which may boost the confidence of jittery investors and affect market expectations, he said at a Dec. 7 briefing. One is further tax reform, including an unconditional reduction in value-added tax in all sectors, as the government does have room to increase its fiscal deficit in the short term. The other is progress on government pledges to clean up state-owned zombie companies to enhance the efficiency of the economy, he said.

In the Chinese zodiac, the pig represents good fortune, luck and a happy life. The previous Year of the Pig in 2007 saw the Shanghai Composite Index surged 97%. After such a dismal 2018, investors must be hoping the porker will bring home the bacon next year.