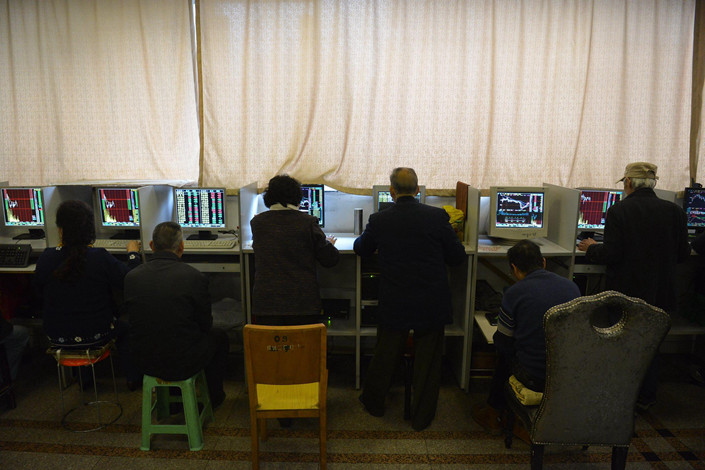 * Yan'an, an impoverished city in the northwestern province of Shaanxi, helped to bail out debt-laden Jiangsu Bicon, eager for the prestige a listed, high-tech company could bring

*The investment is off to a rocky start, with the government already recording a paper loss of 200 million yuan as Bicon’s stock has tumbled, and the future looks tough as the company is still in a precarious financial situation

(Shanghai) — Cash-strapped private companies and their shareholders have been rushing into the arms of deep-pocketed state-owned enterprises and local governments this year as they seek out white knights to rescue them from a severe credit and liquidity squeeze.

But it's been a money-losing venture for some local authorities, including Yan'an, an impoverished city in the northwestern province of Shaanxi which gained fame as the revolutionary base of the Communist Party in the 1930s and 1940s. The city's latest brush with capitalism through an investment in debt-laden Jiangsu Bicon Pharmaceutical Listed Co. is already in the red, underscoring the risks of small-town officials wading into the unfamiliar territory of corporate bailouts.

In September, Yan'an Dingyuan Investment Co. Ltd., an investment vehicle controlled by the Yan'an government, paid 1.9 billion yuan ($276 million), the equivalent of nearly 15% of the city's fiscal income in 2017, to buy a 5% stake in Jiangsu Bicon. Of the 76 million shares bought, 67 million came from Li Zongsong, the controlling shareholder, and two trust plans he controlled, with the remainder purchased from a local new-energy company. Li sold his 3% personal stake in the company, netting him a cool 1 billion yuan. He still holds an 11.3% stake through a block of shares with trading restrictions, in addition to holdings via other vehicles, mainly privately held Xinyi Bicon, which has a 40% stake in the listed company.

In return, the debt-ridden manufacturer agreed to register its headquarters in Yan'an, which put it under the city's jurisdiction for tax purposes, and change its name to YanAn Bicon. It would also benefit from preferential policies offered by the local government.

Luring the company was a feather in the cap of the local government in many ways. Yan'an, a relatively poor city in a remote part of a province dependent on coal mining and agriculture, had failed to nurture a single listed company. Having a publicly traded firm located in the area brought prestige as well as the prospect of big tax payments and promotions for the officials involved. In addition, YanAn Bicon would showcase the government's success in diversifying its economic base and attracting a company in a high-tech, emerging industry. According to its website, YanAn Bicon produces and sells pharmaceutical intermediates, pesticide intermediates, and new-energy and materials products.

The two sides also agreed to cooperate in other ways including the development of a Bicon Smart Industrial Town to make the pharmaceutical and health care sector a new engine of the city's economy, and developing new pharmaceutical markets and investing in new projects.

But the investment has already turned sour for the local government — Yan'an Dingyuan is sitting on a paper loss of 200 million yuan as the Shenzhen-listed shares had fallen to 22.79 yuan as of Tuesday from the 25.42 yuan per share it paid for its stake.

Yan'an Dingyuan's promises of further investment in Xinyi Bicon have so far failed to materialize.

The proposal, which was announced by YanAn Bicon on Sept. 25, involved the government entity buying a 50% stake in Xinyi Bicon, which would allow the injection of more cash into the debt-ridden listed company. Yan'an Dingyuan would become the largest shareholder in YanAn Bicon, effectively turning it into a state-controlled company.

The pharmaceuticals group went cap in hand to Yan'an after its pleas for help were rebuffed by the local authority in its hometown of Rudong county in the coastal province of Jiangsu, some 105 kilometers northwest of Shanghai. The company was seeking a cash injection to enable it to meet put options on two bonds due on Nov. 30 and Dec. 7 that could require it to pay out as much as 1.8 billion yuan, depending on how many investors exercised their option. A put option gives bondholders the right to sell the bonds back to the company at a specified time before it matures.

YanAn Bicon struggled to raise the money to meet its potential repayments. Although it issued a 700 million yuan three-year private bond in April, a later effort to raise 500 million yuan through another private bond placement failed, according to financial data provider Hithink RoyalFlush Info., as the liquidity crunch in financial markets deepened and institutional investors grew increasingly concerned about the company's precarious financial situation.

Nine days before the put option on the first bond was due, S&P Global Ratings lowered the company's credit ratings further down the junk status scale to CCC from B out of concern that it might not be able to make the repayments. S&P also put the company on CreditWatch, indicating the ratings could be further lowered or raised again, for 90 days until it became clear whether the debt-refinancing process has been completed. In comparison, Lianhe Credit Ratings, one of China's biggest domestic ratings companies, still has YanAn Bicon ranked at AA+, the second-highest level on its scale.

In the event, possibly because confidence in the company's future improved following the tie-up with the Yan'an government, few bondholders exercised their put options — YanAn Bicon only had to pay 167 million yuan on put options exercised on the 800 million yuan five-year bond due on Nov. 30. It has not disclosed how much it paid out to investors in its privately offered 1 billion yuan three-year bond due on Dec. 7.

YanAn Bicon loaded up with debt after joining the Shenzhen stock market in December 2015 through a backdoor listing, raising billions of yuan in bond sales to fund its growth which included acquisitions of pharmaceuticals distributors and retailers, and traditional Chinese medicine manufacturers. At the end of June, the company had 5.5 billion yuan of bonds outstanding and loans of 790 million yuan. By the end of the third quarter, its bonds outstanding had fallen to 2.5 billion yuan but its bank loans had surged to 2.2 billion yuan, suggesting loans were being taken out to repay the bonds.

The company's first-half earnings report showed revenue surged 120% from a year earlier to 3.8 billion yuan and net profit jumped 73% to 430 million yuan. Although revenue rose by 73% in the third quarter, boosted by acquisitions, net profit dropped by 2.9% due to the surge in interest payments on debt and a loss on investments in wealth management products.

YanAn Bicon was one of only two listed companies in Rudong. But sources close to the local government told Caixin that officials turned down its SOS because the size of the bailout required was too large and the government was concerned it would suffer losses given the volatile state of the stock market.

Stock exchange filings show that Li and Xinyi Bicon, who have both pledged millions of shares in YanAn Bicon as collateral for loans from brokerage firms, have had to post additional stock in response to margin calls six times since September as a result of the continued drop in the company's share price. Around 99% of Li's personal holdings were pledged.

“The main shareholder of the company has pledged a significant amount of his stake”' as collateral for loans,” the source said. “If he faced margin calls on those pledged shares, especially with the sharp decline in the secondary market, that would represent a huge risk for anyone considering an equity investment. It’s difficult for a government investment arm to take on that risk.

“After that, the company found the Yan'an government, which wanted to attract a listed company, so the two sides struck a deal.”

The Rudong government's caution may turn out to be prescient as the Yan'an authorities grapple with the task of securing the future of debt-ridden YanAn Bicon. Its gamble could eventually turn into a winner, but it's going to be a long march.