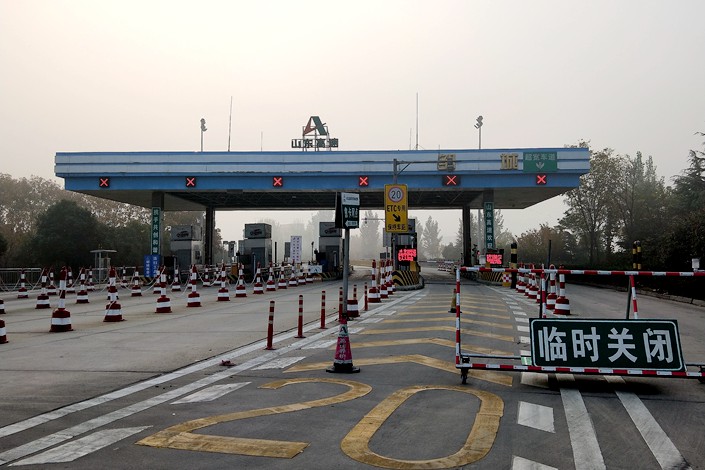 A G3 Expressway toll station in Jining, Shandong province, was closed on Nov. 13 due to heavy fog. Photo: VCG

The new rules were included in draft regulations (link in Chinese) published Thursday by the Ministry of Transport. The regulations aim to curb rising debt risks from local governments’ construction of toll roads caused in part by outdated rules on the size of tolls.

As of the end of 2017, China had 4.7 million kilometers (2.9 million miles) of roads, 3.4% of which are toll roads, according to an annual report (link in Chinese) from the ministry. The country’s total outstanding debt from the construction of toll roads surged to 5.2 trillion yuan ($754 billion) at the end of 2017 from 4.8 trillion yuan a year earlier, the report shows.

The draft rules (link in Chinese) order local governments to strictly control the scale of new toll road projects and to give more consideration to construction costs, financing and the roads’ own ability to repay associated debts. New toll-road projects can include only expressways. New bridges, tunnels and other roads cannot have tolls.

The last time toll roads paid their own way was 2010. From 2010 to 2017, toll road projects in China went from collectively making a profit of 3.2 billion yuan to suffering a loss of 402.7 billion yuan, according to the ministry.

In 2017, total toll fee revenue stood at 513 billion yuan while expenditure reached 915.6 billion yuan. Repayment of principal, interest and costs of operation management accounted for 54.1%, 27.3% and 6.9% respectively of the 2017 expenditure, according to the annual report.

The difficulty of making a profit from toll road projects, as a result of current charging standards and rising costs, have made private capital less willing to invest, the ministry said.

“With the rapid development of toll roads, costs of construction, debt repayments and maintenance expenditures have all continued to increase, but charging standards remain at the level of the 1990s,” the ministry said.

The draft regulations propose a more dynamic evaluation system to assess and determine toll fees, which will still require approval from provincial authorities. The charging standards for government toll roads, for example, shall be determined based on factors such as debt size, interest rate level, local prices and operation costs, the ministry said.