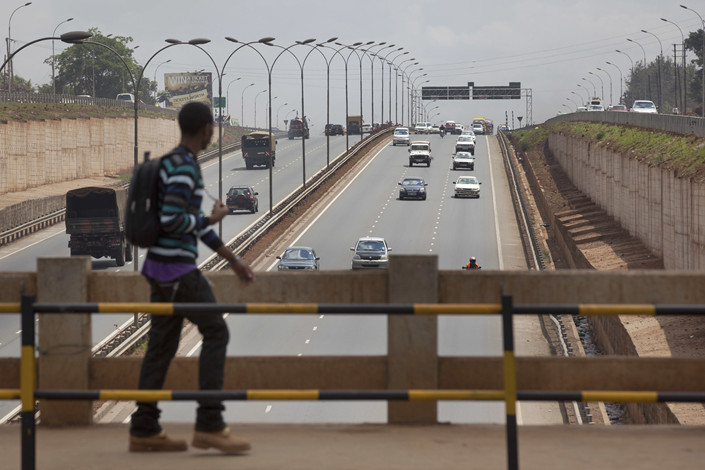 A bridge over a Chinese-built 50-kilometer, $300 million highway leading north out of Nairobi, Kenya, is seen in October 2012. Photo: IC

A $2.6 billion China-led highway project in Kenya has been suspended after one of the Chinese builders said it didn’t receive an advance payment, highlighting the risk of such projects.

The setback for the consortium, led by Guizhou Transportation Planning Survey & Design Academic Co. Ltd., comes as many Chinese infrastructure builders, including private enterprises, have rushed into the African continent in recent years.

Many are heeding Beijing’s call to export their skills to other developing markets under President Xi Jinping’s signature Belt and Road Initiative. But such development also carries a big risk for Chinese firms unaccustomed to doing due diligence in such foreign markets, analysts said.

The outlook was positive last year after the Guizhou Transportation consortium submitted the winning bid to build a 1,073-kilometer (667-mile) highway in the southern county of Kwale. Guizhou Transportation’s part of the work was worth $709 million, and was supposed to see it provide survey, engineering and design services.

That figure would have been about two and a half times that of Guizhou Transportation’s revenue for all of 2017, which totaled 1.9 billion yuan ($276 million).

But the Shanghai-listed company said in a statement (link in Chinese) on Tuesday that it will back out of the contract after the Kenyan project developer, Shelter Solution Ltd. Co., failed to make the advance payment within the agreed deadline.

The work was a typical engineering, procurement and construction (EPC) contract, which has been a traditional way for Chinese infrastructure builders going to Africa, said Billy Wang, a partner at Prasios, an advisory firm. But it appears that the contractor didn’t adequately check the availability of project financing before committing to the work, he added.

In such EPC projects, the Chinese contractor is usually responsible for all activities, including design, procurement and construction. The host company provides financing guarantees, often using third-party sources to provide the actual funds.

In many Belt and Road projects, such funds have typically come from Chinese lenders such as the Export-Import Bank of China, which would ask the host country’s government to act as sovereign guarantor. In this case, however, the announcement did not say who was supposed to provide the funds.

As African governments become increasingly worried about large debt loads, many are reluctant to take on new large-scale infrastructure projects that require a lot of money, Wang said. But a problem is that African countries lack strong private developers who can secure project financing, he added.

Shelter Solution was set up in 2013 by the local government of Kwale County as an engineering infrastructure developer. Wang said the company may have failed to secure the necessary financing with a third-party bank.

Guizhou Transportation said in the statement that the highway project could still continue if the Kenya developer can fulfill the advance-payment requirement.