Why Are China’s Graduate Admissions Tests So Badly Run? 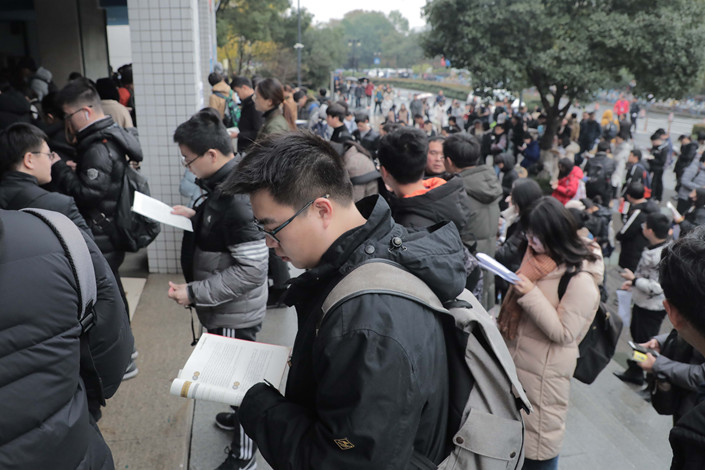 Candidates for the 2019 graduate-school entrance exams wait for the test to begin on Saturday on the campus of Zhejiang University in the eastern city of Hangzhou. Photo: IC

Millions of people took graduate admissions exams in China this month — but some turned their question papers over only to find that the answers had already been printed on them.

Many others found that this year’s questions mirrored questions from past years’ exam papers — which were already publicly known — or that they were asked about topics unrelated to the exam they were supposed to be taking.

“I felt a little desperate — everyone taking the exams for other majors in the exam hall was writing really fast, but all I could do was stare,” Lin Meng (not her real name), an applicant for Shandong Normal University’s Foreign Language Teaching program told Caixin. Lin and other candidates for the program’s entrance test had received question sheets with some of the answers printed on them, the university confirmed last week. The affected Shandong Normal University candidates had to wait in the testing room for hours after a proctor took the problematic question sheets back, Lin told Caixin.

Stories like Lin’s emerged over the past week as a record 2.9 million people took graduate-school entrance exams for 2019 enrollment, amid a tough job market and slowing economic growth in China.

On Tuesday, Shanxi Normal University revealed that it had given applicants for the Chinese History Foundation program near-duplicates of last year’s questions.

The University of Electronic Science and Technology of China in Sichuan province said Sunday (link in Chinese) that it had mistakenly asked a question on solid-state physics that wasn’t part of one test’s intended scope, and that applicants would have to retake the test.

Meanwhile, Southwest University in Chongqing says it has set up an investigation team to look into a suspected leak of questions (link in Chinese) from its natural geography entrance exam, local media reported.

China’s graduate-school entrance exams for many subjects are set centrally by the Education Ministry in Beijing, but others are set by universities for their own use. The problematic test papers discovered this year were all set by the universities, Caixin learned.

The problem is that these entrance exams aren’t being operated by professional test-giving organizations, Xie Xiaoqing, a professor at the Beijing Language and Culture University who specializes in education, told Caixin. Most of the proctors and writer of these exams are transferred from other roles at the last minute, and lack experience, Xie said.

“As (China) liberalizes enrollment in colleges and universities, it must also emphasize the professionalism of examination work,” Xie said. He mentioned the Graduate Management Admission Test and Law School Admission Test in the U.S., which are run and administered by independent organizations, as possible models for China.

China’s universities should reduce their use of standardized tests, and focus on more regular assessments throughout the course of studies, according to Xiong Bingqi, vice president of nongovernmental organization 21st Century Education Research Institute. If universities “place a strong emphasis on quality during the education process, and implement strict elimination of students who don’t meet the education standards, the returns from cheating will fall dramatically, which will also reduce the problems of cheating and leaking (exam questions),” Xiong said.