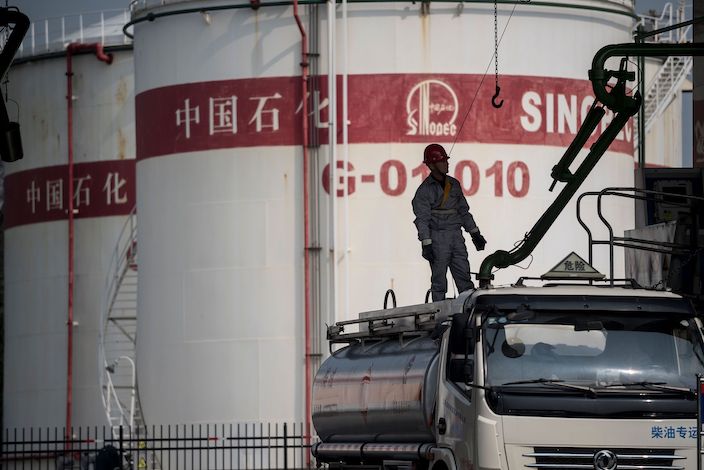 * An investigation is underway into the risk management flaws in Unipec’s hedging operations, sources say

State-owned oil major Sinopec Corp. suspended two top officials of its trading arm, Unipec, after the unit suffered losses on crude oil transactions, according to a Sinopec filing Thursday with the Hong Kong stock exchange. Sinopec didn’t disclose the extent of the losses.

Unipec, a wholly owned subsidiary of Sinopec, “has suffered losses in some crude oil transactions due to the oil price slumps. The company is evaluating the details,” Sinopec said in the filing.

Caixin learned that the suspensions of Chen and Zhan were announced inside Sinopec Wednesday afternoon. An investigation is underway into the risk management flaws in Unipec’s hedging operations, which have led to losses in the company’s oil import business, sources said.

Unipec is one of the main vehicles for Sinopec, Asia’s largest refiner, to conduct oil hedging. But since the hedging operations have been distributed among different subsidiaries, the impact of Unipec’s losses on Sinopec’s performance will be limited, said a person close to the company.

Sinopec in October reported 60% year-on-year growth in third quarter net profit to 18.38 billion yuan ($2.64 billion). But the figure was down from a record high of 22.83 billion yuan in the previous quarter and the first sequential decline after growth of five consecutive quarters.

In the first nine months of 2018, Sinopec’s net profit was up 56% at 59.98 billion yuan, according to the company’s financial report.

A Sinopec spokesperson told Caixin Thursday that Unipec’s deputy general manager Chen Gang has been appointed to manage the company’s daily operations. The business of Unipec has remained normal, the spokesperson said. Caixin was unable to reach Chen and Zhan for comment.

Chen, 56, is a veteran of China’s oil trading industry. He started his career at Sinopec in 1986 and rose through the ranks to lead Unipec after more than two decades at the company.

At the annual Asia Pacific Petroleum Conference in September, Chen predicted that world oil demand would peak at 104.4 million barrels a day in 2035. Improved energy efficiency and technological changes will slow global oil demand in coming years, Chen said at the high-profile event in Singapore.

Given the current supply-and-demand dynamics in global markets, crude oil prices between $60 and $80 a barrel are normal, said Chen at the time.

Zhan was named party head of Unipec in 2015. Before that, he held senior management posts in various subsidiaries of Sinopec.

Established in 1993, Unipec is China’s largest oil trader. By the end of 2017, Unipec had 173 million yuan in total assets with nearly 32 billion yuan in net assets. The company booked 3.9 billion yuan of net profit in 2017.

Unipec trades about 2.2 billion barrels of oil every year, 60% of which are imports to China, according to the company. That accounts for about 43% of China’s total annual crude oil imports.