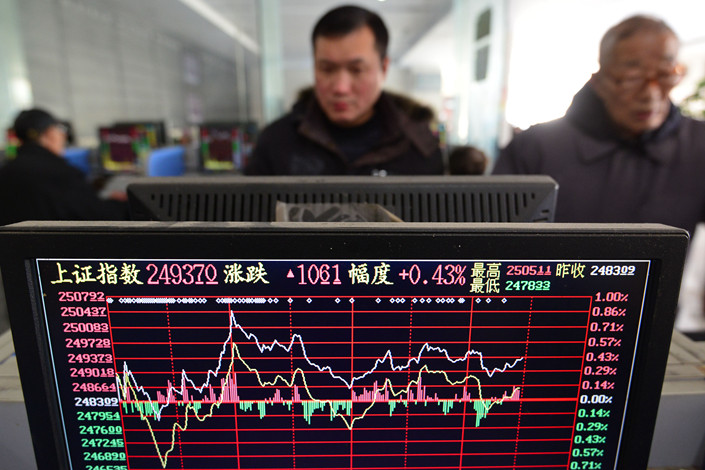 Global equity index provider S&P Dow Jones Indices (S&P DJI) has named the Chinese A-share stocks that will be included in its global benchmark indexes in September as it follows in the footsteps of rivals MSCI Inc. and FTSE Russell in responding to China’s opening of its financial markets to overseas investors.

The list of 1,241 companies, released on Monday, comprises stocks that are accessible to foreign investors via the northbound channel of the Shanghai-Hong Kong Stock Connect and Shenzhen-Hong Kong Stock Connect. The A-shares will be added to some of S&P DJI’s global benchmark indexes with an Emerging Market classification and will be included from Sept. 23, but at a reduced weighting to reflect limits on foreign investment in Chinese companies, according to a statement on the provider’s website. Each A-share company will have a float-adjusted market capitalization weight and will be included at 25% of that weight.

China’s stock markets were the world’s worst performers in 2018, with the benchmark Shanghai Composite Index falling almost 25%, the biggest drop in a decade, amid growing concerns over an economic slowdown and rising trade tensions with the U.S.

Nevertheless, foreign investors are increasingly seeking exposure to the country’s stock markets as the government has given them greater access through initiatives including the Stock Connect programs and as financial reforms have brought domestic markets more into line with global standards.

U.S.-based MSCI was the first index provider to include A-shares in its global indexes, announcing in June 2017 that it would include more than 220 mainland-listed companies in its emerging-market equity indexes from June 2018. In September, FTSE Russell threw its hat into the ring, announcing it would include mainland shares in its major benchmarks in a phased timeline starting in June. More than 1,200 stocks will be eligible for inclusion, based on the A-shares available for trading via the northbound Stock Connect programs.

S&P DJI made its announcement on Dec. 5, saying that it recognized “the importance of China in global investment portfolios and the evolution of its markets over the last several years,” including increased accessibility to foreign investors through the Stock Connect programs.

Despite the slump in China’s stock markets last year, which wiped $2.4 trillion off the value of equities listed on the country’s two exchanges, foreign interest is growing due to the increased access offered by the Stock Connect programs and through the inclusion of A-shares in global indexes that attract trillions of dollars of passive investment.

He estimated that $13.9 trillion of investor capital is linked to MSCI indexes worldwide, and that more than $1.9 trillion assets are benchmarked to MSCI’s Emerging Market gauges alone.