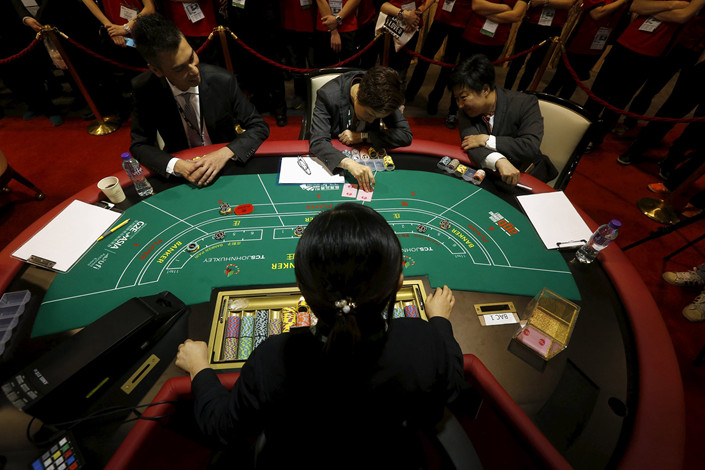 The Global Gaming Expo Asia is held in Macau on May 16. Photo: VCG

Macau’s gambling industry reported its best revenue in four years in 2018 after Beijing’s crackdown on corruption and luxury spending saw spending plunge by over a third, government data show.

The special administrative region’s gaming industry continued its recovery, with gross revenue in the sector reaching 303 billion patacas ($38 billion), a 14% increase year-on-year, according to figures from the Gaming Inspection and Coordination Bureau, Macau’s gambling watchdog.

The sector’s performance in December also went beyond analysts’ expectation. In the month, gross gaming revenue rose to about 26.5 billion patacas, a 17% climb year-on-year.

“Macau December GGR (gross gaming revenue) came in stronger than expected… above Bloomberg consensus of (an increase of) 11 percent and above our estimate of (an increase of) 12 percent to 15 percent,” said analysts from brokerage firm Sanford C. Bernstein & Co. LLC in a research note on Tuesday.

Analysts said that the October opening of the Hong Kong-Zhuhai-Macau Bridge likely did little to boost revenue. The number of people visiting Macau rose 15.3% year-on-year in November, which is being attributed to the bridge, according to a Union Gaming Securities Asia Ltd. research memo.

However “the surge in visitation is not translating to casino foot traffic,” said Union Gaming analysts. “Rather, we’re seeing a dynamic where tour groups are utilizing the bridge instead of the ferry service to shuttle people between Zhuhai and Hong Kong by way of Macau.”

The Union Gaming analysts said they expect to see strong growth continue into the coming year.

Morgan Stanley analysts said in a report that gaming stocks are likely to do well in the coming years, even if the sector faces disruption from higher taxes or greater competition. The government won’t announce an updated policy on gaming license renewals until after Macau’s new chief executive is appointed in December, the Morgan Stanley report said.

Macau’s economy relies heavily on the gaming industry, benefitting from visitors from the Chinese mainland, where the only form of legal gambling is state-backed lotteries. In 2013, the gaming industry peaked at over 60% of local gross domestic product (GDP), according to a report published by Tianjin University.

“Although Macau’s gaming industry entered a period of decline thereafter, its share of GDP was still as high as 47% in 2016,” said the authors of the report, adding that Macau’s lack of a broad-based economic structure has raised concerns over the sustainability of local economy.