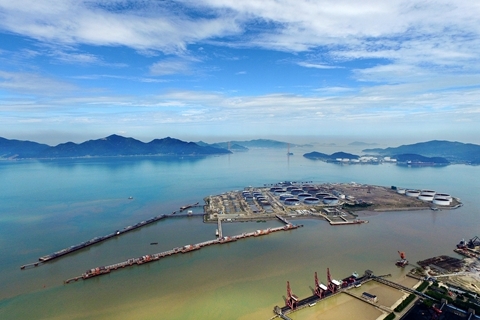 The Caofeidian project, an offshore oilfield in Bohai Bay jointly developed by Brightoil and CNOOC, aims to more than double production to 60,000 barrels a day by October from 28,000 barrels a day currently, according to the statement.

Under industry practice, CNOOC and Brightoil should provide investments in proportion to their stakes in the oilfield. Brightoil’s need for advance payment from CNOOC reflects the company’s cash shortage.

CNOOC owns 51% of the Caofeidian oilfield, while Brightoil acquired a 40% stake in 2014 from U.S. oil explorer Anadarko Petroleum Corp.’s China unit for $1.05 billion.

In mid-2017, to ensure further development and increase production, the Caofeidian oilfield operators began to carry out a comprehensive development adjustment plan, which required an investment injection by shareholders. But Brightoil ran into financial and operational issues at the same time.

Brightoil’s Hong Kong-listed shares have suspended trading since October 2017 after the company delayed the release of its financial results for fiscal year ended June 30, 2017.

In July 2018, Brightoil tried to sell its oil storage and terminal facilities along with 15 vessels after the company failed to meet deadlines to repay more than $30 million in debt. But in November, the company terminated the plan and said instead it was working with banks to restructure its debt.

Brightoil was also forced to sell 12.6 million shares of Tencent-backed WeBank following a court ruling after it failed to repay a loan of 339 million yuan ($49.3 million) to Ping An Bank.

Founded in 1992, Brightoil started as an oil trading and bunkering company. Through the acquisition of stakes in the Caofeidian oilfield, the company has pushed into the upstream segment.

In addition to the Caofeidian oilfield, the company also owns rights in oil and gas blocks in Xinjiang Taruim Basin. It has three oil storage facilities in Shenzhen, Zhoushan and Dalian, with a total capacity of 12 million cubic meters. The facilities are equipped with berths that can accommodate vessels of up to 300,000 tons.

Since 2016, Brightoil has taken its business online through the launch of an energy and financial e-commerce platform. The company called the initiative “cloudoil,” aiming to build a global online and offline consumption model for oil customers. Brightoil has said its cloudoil platform has attracted more than 12 million customers. But the company hasn’t provided any update on the project since.