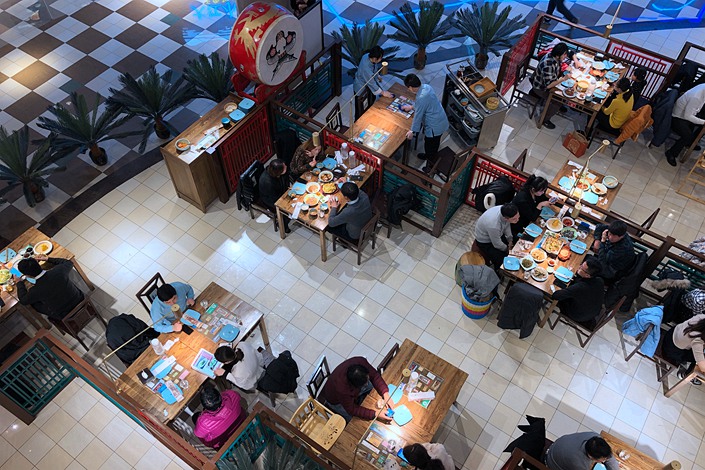 A restaurant in Beijing on Dec. 15. Photo: Wu Gang/Caixin

Expansion in China’s services activity accelerated for the second straight month to a level not seen since June 2018 on increasing foreign demand and improving business confidence, a Caixin survey showed Friday.

The Caixin China General Services Business Activity Index, which is followed by China watchers as one of the earliest indicators available each month gauging the country’s economic health, rose to 53.9 in December from 53.8 in November and 50.8 in October. A reading above 50 indicates expansion, while anything below that points to contraction.

The services sector has not grown this fast since June 2018, when the rate was also 53.9.

The increase in new export orders received by services providers grew to a six-month high in December. However, the growth in overall new business edged down, pointing to weakening domestic demand of services, the survey showed.

The sub-index of business expectations went up after dropping for three consecutive months, reflecting service providers’ strengthening confidence in their business outlook for the coming 12 months.

The resilience in the services sector and a slight uptick in production in the manufacturing industry after two months of stagnation underpinned the Caixin China Composite Output Index, which covers manufacturers and service providers, to increase to a five-month high of 52.2 last month. But the headline Caixin China Manufacturing Purchasing Mangers’ Index fell to 49.7 in December due to shrinking domestic and external demand, marking the first contraction since May 2017.

December’s reading of the composite output index reflected “easing downward pressure on China’s economic growth,” said Zhong Zhengsheng, director of macroeconomic analysis at CEBM Group, a subsidiary of Caixin Insight Group. But he warned that domestic demand for both services and manufacturing was weakening despite a modest improvement in new export orders.

The Chinese government has stepped up efforts to stabilize the job market amid slowing domestic growth and an ongoing trade war with the U.S. The State Council, China’s cabinet, has ordered local authorities to hand out cash incentives to employers who lay off zero or few workers this year. Widespread unemployment is likely to breed social instability — something Beijing works hard to avoid.

The services sector, which includes finance, real estate services, marketing, transportation and retailing, accounts for more than half of China’s gross domestic product. Also known as the tertiary sector, the services sector is more labor-intensive than manufacturing, and policymakers count on it to create jobs. More than 40% of the people who were employed worked in the services sector last year, the government’s data show.

The growth in payroll numbers in the services sector hit a three-month low in December, indicating the industry’s weakening capacity to create jobs, said Zhong.