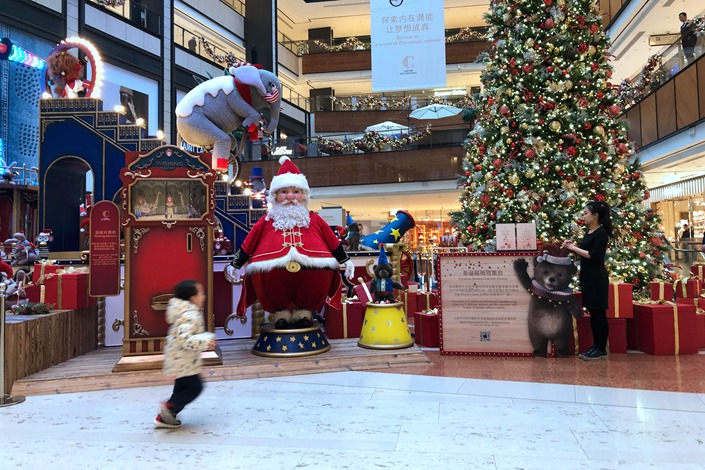 A child runs past holiday decorations Sunday in a department store in Beijing. Photo: Wu Gang/Caixin

Activity in China’s services sector rebounded in November, increasing at its fastest pace in five months, mainly on the back of resilient domestic demand as growth in foreign orders slowed, a Caixin survey showed Tuesday.

The Caixin China General Services Business Activity Index, which provides a snapshot of operating conditions in the country’s services sector, rose to 53.8 last month from 50.8 in October, the strongest reading since June. A reading above 50 indicates expansion, while anything below that points to contraction.

“The gauge for composite new orders recorded the most positive rebound, reflecting that the recovery in economic activity was mainly driven by improved demand,” Zhong said. He noted that domestic demand has “probably played a key role” as the measure for new export business dipped.

The growth in new orders placed at service providers hit a five-month high in November, with the companies polled citing improved underlying demand and greater client numbers. But new export business, although still in expansionary territory, rose at a weaker pace last month than it did in October.

This trend was also obvious in the manufacturing sector. Although new business received by Chinese manufacturers grew at its strongest rate in four months in November, foreign orders continued to fall for the eighth straight month and the loss deepened last month from October.

Despite the upturn in overall new orders, service providers’ business confidence for the next year declined to its lowest level since July. A number of respondents voiced concerns about intense competition and the future strength of client demand.

The services sector, which includes finance, real estate services, marketing, transportation and retailing, accounts for more than half of China’s gross domestic product, according to government data. Also known as the tertiary sector, the services sector is more labor-intensive than manufacturing, and policymakers are counting on it to create jobs.

Last month, service companies expanded their workforces for the second consecutive month. But the rate of job creation moderated from that in October and failed to offset a further modest reduction in manufacturing employment, leading overall staff numbers at the composite level to fall for the sixth straight month.