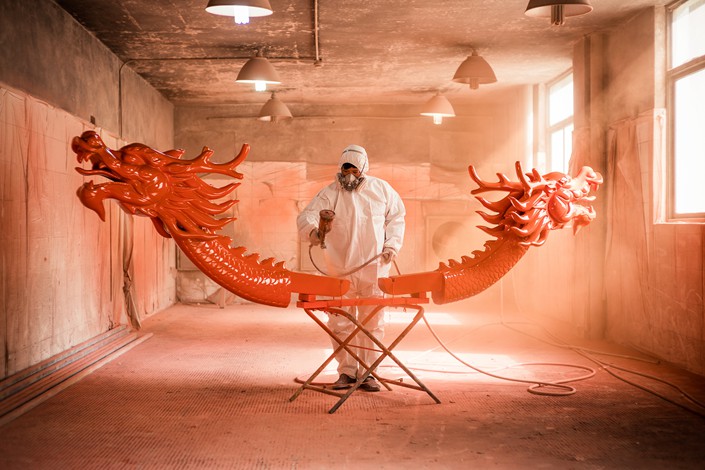 * The official manufacturing purchasing managers index (PMI) dipped to 50 in November, indicating that growth has stagnated

* One key reason for the drop in the PMI is weaker domestic demand. Among the five subindexes that make up the PMI, the one for new orders suffered the biggest drop

The official manufacturing purchasing managers index (PMI), which gives a snapshot of operating conditions in the manufacturing sector, dipped to 50 in November from 50.2 in the previous month, according to data released Friday by the National Bureau of Statistics (NBS). The reading hasn’t been this low since July 2016 and marked the third straight monthly drop.

A reading of 50 separates expansion from contraction. The higher the number above 50, the faster the expansion, while the further below 50, the greater the contraction.

Manufacturing accounts for 30% of China’s gross domestic product. The latest PMI reading suggests that “policy easing is still struggling to put a floor beneath growth,” Julian Evans-Pritchard, an economist with research firm Capital Economics, said in a note.

One key reason for the drop in the PMI is weaker domestic demand. Among the five subindexes that make up the PMI, the one for new orders suffered the biggest drop, moving closer to the dividing line of 50 despite staying in positive territory, NBS data showed. In addition, the import gauge fell further into negative territory.

Amid the ongoing Sino-U.S. trade dispute, the measure for new export orders remained in contractionary territory in November — little changed from the month before, according to NBS data. Future changes to the export sector depend on the result of the upcoming meeting between the Chinese and American presidents on the sidelines of the G-20 summit this weekend, multiple analysts said.

According to NBS data, manufacturers added production at a slower pace in November. What’s even worse was that profit margins shrank. Suppliers raised prices for major raw materials, though at a marginal rate. But manufacturers cut the prices they charged their customers.

Small manufacturers suffered the most, with their corresponding PMI slipping further into contraction. The PMI for midsize manufacturers edged up, but remained in negative territory. The PMI for large ones stayed in expansionary territory but dropped.

Growth in the producer price index, a leading indicator for domestic demand, has fallen rapidly in recent months, which means that growth in corporate earnings and manufacturing investment may continue to slow, analysts at investment bank China International Capital Corp. said in a note.

China’s nonmanufacturing business activity index (BAI), which includes the services and construction sectors, fell further to 53.4 in November from 53.9 in the month before, NBS data showed. This was mainly driven by the drop in the BAI for the construction sector. This could be a sign that “the recent uptick in construction activity is fizzling out as local governments pare back spending,” Evans-Pritchard said.

Earlier this year, Beijing urged local governments to boost infrastructure investment amid slowing domestic growth with money raised from bond issuances. After a peak in the third quarter, the combined issuance amount dropped sharply in October as governments came close to using up their annual quotas.

Friday’s official data have added to concerns that the world’s second-largest economy will continue to slow. China’s economic growth may moderate to 6.4% in the fourth quarter of 2018 from 6.5% in the previous quarter, analysts with Australia and New Zealand Banking Group said in a note.

The independently compiled Caixin China Manufacturing PMI is scheduled to be published on Monday.