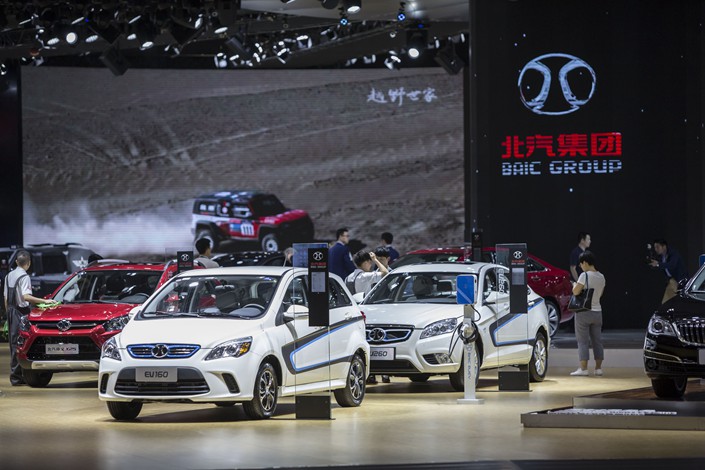 One of BAIC Group’s publicly traded affiliates, Chengdu Qian Feng Electronics Co. Ltd., will buy Beijing Electric Vehicle Co. Ltd., also known as BJEV, in a stock sale and asset-swap deal. As part of the plan, Qian Feng will sell 761.1 million shares at 37.66 yuan apiece to all shareholders of BJEV for the acquisition, a BAIC subsidiary said in a statement to the Shanghai stock exchange Monday.

BJEV will become the first state-owned manufacturer of new-energy vehicles to list on a mainland stock exchange, competing for attention from investors who have driven up the share price of BYD Co. Ltd., a Warren Buffett-backed carmaker that trades both on the mainland and Hong Kong. BJEV — which is disclosing a valuation publicly for the first time — is among companies raising funds and expanding to get a head start as China’s government encourages more clean-energy vehicles to hit the roads.

Shares of BAIC Motor Corp. rose as much as 5.4 percent in Hong Kong on Tuesday, the biggest intraday gain in January.

BJEV’s sales of electric vehicles almost doubled to 103,199 last year. The company said it boosted its share of the Chinese electric-vehicle market to an estimated 23 percent last year, from 15 percent in 2016.

BJEV raised 11 billion yuan in its latest round of fundraising announced in July, mainly from state-owned companies, following a 3 billion yuan round in 2016.

China surpassed the U.S. in 2015 to become the world’s biggest market for new-energy vehicles as both traditional automakers and a bevy of startups work to meet the government’s target to boost yearly sales of plug-in hybrids and fully electric cars by 10-fold in the next decade. China has made electric vehicles a strategic initiative as part of its push to lead in automotive technology, curb pollution and cut dependence on imported oil.

In Las Vegas at this month’s CES — a global stage to showcase the latest developments in consumer electronics — more than a third of the 4,500 exhibitors were from China. Byton, a Nanjing-based company started by former BMW AG executives, unveiled a $45,000 SUV. Within days, XPeng Motors, backed by funding from Alibaba Group Holding Ltd., unveiled a production model.