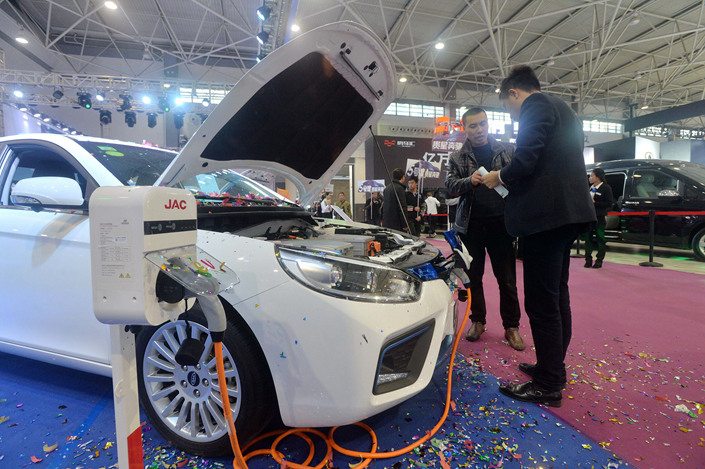 A JAC new-energy vehicle sits on display at an auto show in southern China on Oct. 26. Photo: VCG

* Central government spent 393 billion yuan ($56.6 billion) from 2009-17 to promote the development of new-energy vehicles, according to the Center for Strategic and International Studies

* Though Beijing has helped spearhead market development on the supply side and given birth to around 500 electric-car makers, real consumer demand has yet to fully emerge, analysts said

(Beijing) — Despite being the world’s largest electric-car market, the domestic industry’s boom was largely the result of the government, and real consumer demand has yet to be fully realized, industry watchers said.

Between 2009 and 2017, Beijing spent a total of 393 billion yuan ($56.6 billion) to promote the development of new-energy vehicles — those that run on pure electric, hybrid and fuel-cell technologies, according to a report released Monday by the Center for Strategic and International Studies, a U.S. think tank.

The $56.6 billion amount included sales subsidies, government procurement, government subsidies in infrastructure and sales tax exemption, as well as research and development initiatives. Cumulatively, they amounted to 42% of all new-energy vehicles sales, or 929.1 billion yuan, over the nine-year period.

That’s an “amazingly high ratio of government funding for any kind of commercial activity, in China or anywhere else in the world,” the report said.

“What the figure says is that this industry exists because the government wants it to exist, not because the market has found a balance between supply and demand,” said Scott Kennedy, a China policy expert and author of the report entitled “China’s Risky Drive into New-Energy Vehicles.”

China has retained the crown of the world’s largest electric-car maker since 2015, when its new-energy vehicles sales tripled to more than 330,000 units.

Though Beijing has helped spearhead market development on the supply side and given birth to around 500 electric-car makers, real consumer demand has yet to fully emerge, analysts said.

Current obstacles include the limited range of batteries and a lack of vehicle-charging stations.

Zeng added that most of the output of Chinese electric cars is digested through purchases by leasing companies or ride-hailing operators, instead of individuals.

But Zeng said the government is able to implement other measures to boost demand, such as by putting further limits on obtaining license plates for traditional gasoline-powered cars in larger cities.

Also, Beijing’s decision earlier this year to reduce the subsidy and raise the technology standards for companies to receive incentives could hinder further development of the sector. The subsidies will be totally abolished after 2020, according to the government plan.

China is implementing a policy that Zeng described as using a “carrot and stick” approach. Starting in January, a so-called “dual-credit” system will be implemented. The system requires all automakers to produce a certain amount of new-energy vehicles.

Under that program, automakers must obtain a specific amount of credits that are linked to how many new-energy vehicles they sell. Those that don’t meet the quota have to purchase credits from rivals that exceed it.