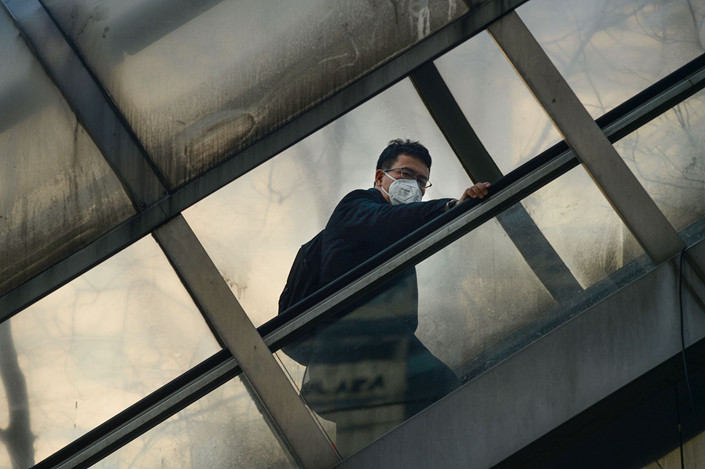 A man wearing a face mask rides an escalator to cross an overpass in Beijing on Dec. 19. Photo: VCG

China’s air quality improved again in 2018, with the average levels of a key pollutant dropping by 9.3% in the 338 cities included in data released Monday (link in Chinese) by the Ministry of Environment and Ecology.

One of the ways in which air pollution is measured is by the concentration of PM2.5 — hazardous particulate matter under 2.5 micrometers in width — given as micrograms per cubic meter. Major sources of PM2.5 include burning coal, emissions from heavy industry, and emissions from cars and trucks.

While the average PM2.5 concentration dropped to 39 micrograms per cubic meter, the statement noted that 262 of the cities did not meet the air quality standard set by the 13th Five-Year Plan (2016-20). That standard aims for the average annual PM2.5 level to be under 43 in all cities.

China declared a “war on pollution” in 2014 that aims to cut back on the dangerous air, water, and soil pollution that has mushroomed over decades of rapid economic and industrial growth. Central and local governments have taken hard lines to limit industry emissions and ban home use of coal in order to hit pollution reduction targets.

On a macro scale, the results for 2018 were positive. The ministry found that the average PM2.5 level in December was 18.5% lower year-on-year.

The ministry said that 79.3% of days had “good” air quality in 2018, up 1.3 percentage points from 2017. Air quality in China is considered “good” when the country’s air pollution index, weighted using six major pollutants including PM2.5, is below 100.

Northeastern cities in China’s heavy-industry heartland, such as Harbin and Changchun, were noted for their air quality improvement over all of 2018. Harbin’s pollution dropped 21.9% year-on-year from 2017, the ministry’s report said. On Monday, official data from Beijing’s environmental protection bureau said that the capital’s average concentration of PM2.5 last year dropped 12.1% from 2017.

However, the ministry also called out many cities whose air quality had declined or barely improved. Linfen, a city in the southwest of North China’s Shanxi province notorious for high pollution, came in last of 169 cities for both December and overall 2018 pollution, dropping below Hebei province’s Handan, which came in last place in 2017.

China’s air pollution saw a major improvement from November 2017 through January 2018, when favorable weather patterns and “one-size-fits-all” production cuts on heavy industry in northern China made way for a historic drop in PM2.5 concentration. Many analysts worry that such an improvement may be difficult to replicate this winter, as wind and weather patterns have so far proved to be less favorable.

According to Reuters, nine cities in Henan province recorded a rise in PM2.5 in December, with readings up 12% from 2017 levels. Reuters’ analysis of official data found that November emissions in these cities may have increased 107% year-on-year.

“We can see from the poorest performing cities, however, a typical combination of heavy industry and specific geographic/topographic features,” he added. “Cities inland that are not exposed to rapid changes in wind direction and speed are naturally disadvantaged when it comes to air pollution.”

Ma Jun, an environmentalist and director of the Institute of Public & Environmental Affairs, was also encouraged by the results. “However, large-scale and long-term heavy pollution often occurs in autumn and winter,” he told Caixin. “Solving this problem is key.”