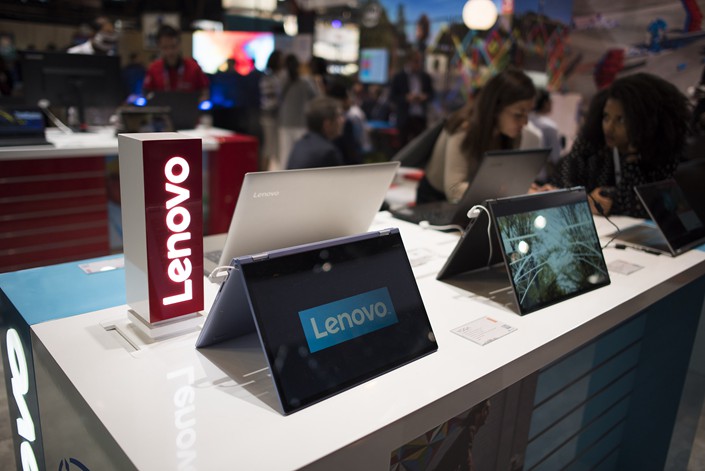 Lenovo's booth at a Paris trade fair on May 24. Photo: VCG

Chinese PC giant Lenovo Group Ltd. retained its global crown for a second consecutive quarter at the end of last year, with the company’s shipments posting growth even as the broader market contracted, according to two new surveys published on Friday.

Lenovo’s resurgence came on the back of its purchase of the PC assets of Japan’s Fujitsu Ltd. last year, which helped the company post growth for the year even as the global market shrank, according to research houses Gartner and IDC. That helped it to take the spot as the world’s largest PC seller from U.S. giant HP Inc. in last year’s third quarter, and retain that position in the fourth quarter as well.

Both IDC and Gartner named Lenovo as the world’s top PC seller during the fourth quarter, the researchers attributing to it a 24.6% and 24.2% share, respectively. IDC put Lenovo’s share at 1 percentage point ahead of HP’s for the period, while Gartner put the Chinese company ahead by 1.8 percentage points. Overall, the global PC market contracted by about 4% for the quarter, in its weakest performance of the year.

For all of last year, Lenovo’s PC shipments grew by 6.9%, giving it 22.5% of the global market, or 0.8 percentage points ahead of HP, according to Gartner. IDC put Lenovo’s annual growth at a slower 3.1% giving it 23.2% of the market for the year, the same as HP. Both surveys said HP’s shipments grew about 2% for the year.

But while the two leaders posted annual growth, the overall global PC market contracted 0.4% for the year, according to IDC, and 1.3%, according to Gartner. IDC predicted the year ahead could see more challenges for an industry that has posted sluggish growth for years as traditional PCs get overtaken by a new generation of smaller, more mobile devices led by smartphones.

“The ongoing economic tensions between China and the United States continue to create a lot of uncertainty in the business environment in China. As demand for Chinese products in the U.S. drops, this particularly impacts businesses of all sizes from the manufacturing sector in China, which, in turn, translates to a drop in IT purchases by these companies,” said Maciek Gornicki, an IDC research manager.