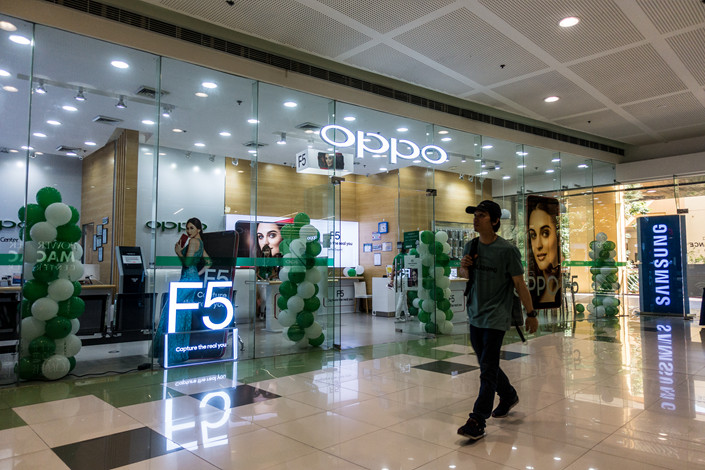 Oppo Electronics Corp. is branching out from its core smartphone business into other internet-connected smart devices as it faces intense competition in the increasingly saturated handset market.

Oppo has set up a mobile terminal unit to target non-smartphone devices such as watches, headsets and a family of connected technologies that make up the internet of things (Iot), the company announced on Monday.

But the unit will devote the coming year to research and development, rather than commercialization, Caixin has learned.

With the establishment of the new unit, Oppo is following similar moves by peers such as Xiaomi Corp. and Huawei Technologies Co. Ltd. In November, Xiaomi announced that its next areas of growth will be artificial intelligence (AI) and the IoT, as the smartphone-maker saw sales decline in its core business.

After years of strong growth, China’s mobile phone market is shrinking. Last year, the nation’s total smartphone shipments fell 16% to 390 million units, according to a report published early this month by the China Academy of Information and Communications Technology.

Oppo has been caught in the headwinds of China’s overall market slump. For the third quarter of 2018, the company’s total shipments in China were down 2.9% year-on-year to 21 million units, compared to the 5.5% growth in the previous quarter, according to research firm IDC.

In IDC’s third quarter list, Huawei consolidated its top spot with around a quarter of the market. That was followed by Vivo, Oppo and Xiaomi with 22.3%, 21% and 14% shares. Vivo is Oppo’s sister brand under Shenzhen-based BBK Electronics Corp. Ltd.

Oppo said its new mobile terminal division will have around 200 people by the end of 2019. It will be led by the company’s vice chairman Liu Bo, who will report directly to CEO Chen Mingyong.

A company source who was not authorized to speak to the press told Caixin the company won’t be producing a smart assistant, despite the current trend.

Almost every tech company now has its own smart assistant. In the U.S., Amazon.com Inc. has Alexa and Echo; Apple Inc. has Siri and HomePod; and Google LLC has Google Home. In China, there are at least 50 brands of smart speakers.

Jason Tan contributed to the story.