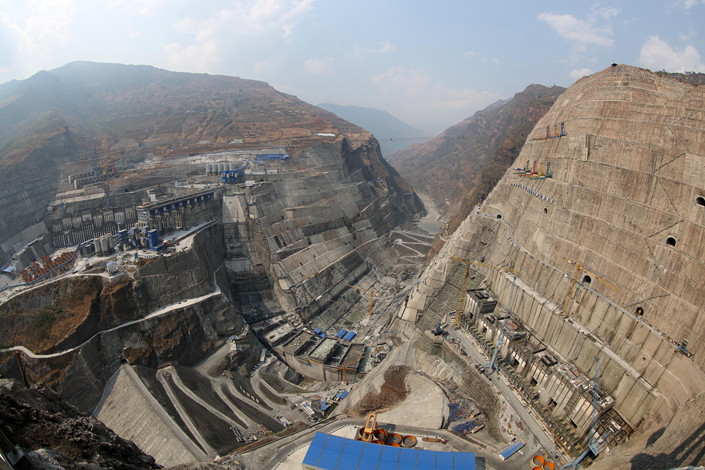 Construction proceeds on the Baihetan hydropower station in the lower reaches of the Jinsha River on March 10. Photo: IC

China’s state planner has given the green light for a towering 239-meter (784 feet) hydropower dam on the mountainous Tibet-Sichuan border as plans to dam the Yangtze’s upper reaches gather pace, concerning environmentalists.

China is the world leader in hydropower production with 341 gigawatts (GW) of capacity, meeting a fifth of the country’s colossal energy needs, according to the International Energy Agency.

Greater concern over hydropower’s environmental impact has slowed development over the last four years, but recent projects in the Tibet autonomous region suggest dam development might be moving into a higher gear.

The newly-approved 2-GW Lawa hydroelectric plant will be built on the main course of the Jinsha River, a Yangtze tributary that runs between China’s southwestern Sichuan province and the Tibet, before flowing south into Yunnan province, the National Development and Reform Commission said in a notice (link in Chinese).

The Lawa plant is one of eight hydropower projects in various stages of development along the Jinsha, where just under half of a planned 72 GWs has been completed. Environmental groups including the Hengduan Mountain Research Group and International Rivers have warned several times in the last few decades that the projects threaten the region’s delicate ecological balance and could exacerbate landslides.

Developers claim such concerns have been taken on board in recent plant designs and environmental assessments, with the local government arguing that such projects will provide employment in the underdeveloped region.

Yet such claims were put to the test in June when it emerged that the sluice gate, which helps control the flow of water, at Huadian’s 21.9 billion yuan Ludila plant on the Jinsha had been washed away a year earlier because of design faults. Problems on plants on the Jinsha have caused “irreversible damage” to the river, Ma Jun, director of the Institute of Public & Environmental Affairs, told the South China Morning Post.

The incident did not stop the company from pursuing further development in the region. Last year, it began work on the 18 billion yuan, 5.4-GW Suwalong hydropower project on the Jinsha’s river’s upper reaches, which will be the biggest dam in Tibet when completed in 2021.

Yet the government appears to be paying greater heed to the environmental blowback from unsound projects, with President Xi Jinping calling for an “all-out effort” to protect the 6,300-kilometer (3,915-mile) Yangtze River at a symposium in April. In November, environmentalists celebrated the demolition of an illegally built dam in Shengxing, Sichuan, while small, illegally built dams along the river are receiving greater scrutiny.