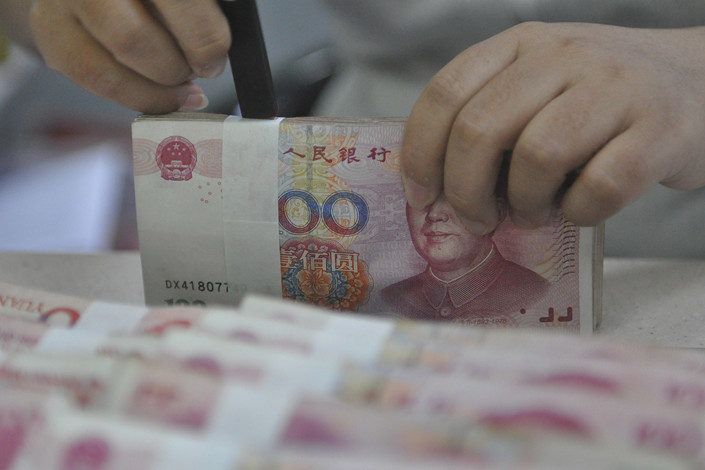 China’s banking regulator has taken additional steps to give underprivileged groups greater access to credit as a way to bolster the country’s economy as growth slows. Photo: VCG

* In addition, local companies must now receive at least 70% of new bank loans each year

(Beijing) — China’s banking regulator has announced it will tolerate higher bad-loan ratios from rural banks for loans to farms and small businesses.

The change is just the latest government effort to give underprivileged groups greater access to credit as a way to bolster the country’s economy as growth slows.

Policymakers have issued a slew of policies since October designed to aid the struggling private sector and small businesses, such as tax and fee cuts. The central bank has also lowered the percentage of funds that banks have to hold in reserve in an effort to spur lending.

In the latest step on Monday, the China Banking and Insurance Regulatory Commission (CBIRC) announced it has let rural banks have bad-loan ratios of at least 5% on loans to the agricultural sector, according to a statement on its website. The CBIRC also said it has allowed bad-loan ratios for loans to small and midsize firms to be 3 percentage points higher than their own nonperforming-loan ratios.

The banking industry had an average bad-loan ratio of 1.89% at the end of 2018, according to the latest CBIRC data.

China’s more than 1,400 rural banks had 23 trillion yuan ($3.40 trillion) in assets as of September, accounting for 10% of total banking assets, according to the CBIRC. Agricultural industry loans accounted for 60% of their outstanding loans, and loans to small businesses made up 50%.

There is some overlap in the two categories.

“Rural banks are the leading financial force supporting the two sectors. They play an irreplaceable role in regional economic development,” the statement said. “However, during the process of reform and development, some rural lenders increased their assets blindly without serving the local agricultural and small-business sectors.”

That last sentence refers to the aggressive expansion by some banks in the past outside their normal regions of operation. The expansion was driven by a desire to earn higher yields than they could get just by issuing loans locally. The situation made it even harder for local companies to get credit, one local banking regulator told Caixin.

Local banks exist for the most part to lend to locals. To force local banks back toward their original purpose and guide more credit to small and private businesses, the CBIRC has required local loans make up at least 50% of the rural banks’ total outstanding loans. The requirement aims to keep the banks from expanding outside the areas where they are registered to do business.

To meet the requirement, rural banks are likely to cut back on investing in bonds and special purpose vehicles, the latter of which is a channel for “shadow banking,” said He Fan, an analyst at Industrial Bank Co. Ltd.

In addition, the CBIRC has also required that local companies receive at least 70% of new bank loans each year, according to the statement. The banks also have to gradually increase loans to agricultural concerns and small businesses until such loans account for at least 80% of their total outstanding loans. The regulator will begin assessing banks every April on how well they comply with these new requirements.

These changes reflect government efforts to ensure than funds available through targeted monetary support for small companies get where they are supposed to go, experts and analysts said.

There are two ways to turn that around, Qu said. “One is through financial reform to allow more diversity and competitiveness in the market, but that takes time. The other short-term boost is through prudent management and changes to the detailed assessment of lenders’ performance,” he said.