By Leng Cheng and Quan Yue 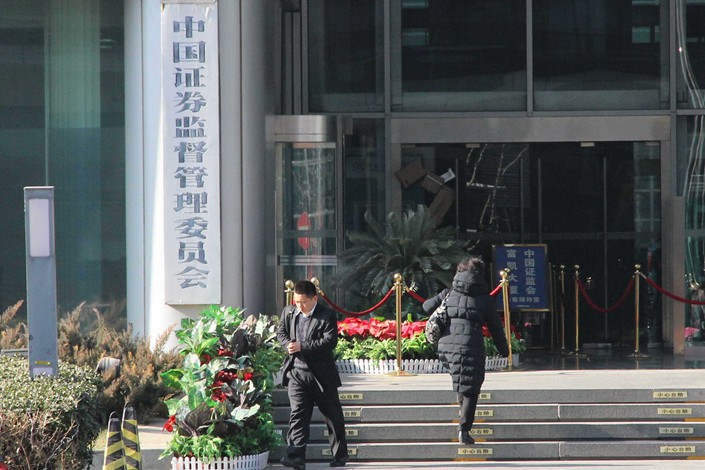 The headquarters of the China Securities Regulatory Commission is seen in Beijing. Photo: IC

China’s securities watchdog has slashed the number of members of the powerful listing review panel by nearly two-thirds, highlighting a lasting tough stance on companies who plan to float shares on the country’s stock exchanges.

The panel — which reviews new listings for the country’s two main boards in Shanghai and Shenzhen, and the Nasdaq-style ChiNext — was cut from 63 members down to 21, according to the Friday announcement (link in Chinese) from the securities watchdog. Twelve of the 21 members are new appointees.

The China Securities Regulatory Commission (CSRC) did not provide any official explanation for why the panel has been slimmed down, and why the new number falls short of the CSRC’s September rules, which say that the listing review panel should have 35 members.

About 62% of the members of the new team — 13 in total — are from within the ranks of the CSRC, up from 52% previously, with the rest coming from the Shenzhen Stock Exchange, law firms and accounting firms. None of the candidates from financial institutions, academic bodies, asset assessment companies, and listed enterprises — included in a list of 53 candidates published in November by the CSRC — made it on to the panel.

Notably, there are no panelists from the Shanghai Stock Exchange, the country’s largest, down from seven previously. This may spring from a desire to allow its staff members to focus on preparing for the bourse’s upcoming launch of a high-tech board, a senior executive at a major brokerage firm who requested anonymity told Caixin.

The high-tech board, which was proposed by President Xi Jinping in November, aims to help startups and fast-growing companies in strategic and emerging industries attract foreign investors and to test a long-touted registration system. Caixin earlier reported that regulators have nearly finishing drafting rules for the board.

Unlike many developed markets, companies in China have long been required to receive regulatory approval for initial public listings (IPOs) on the Shanghai and Shenzhen bourses, which gives the review panel a great say on companies’ fundraising activities.

The review process has grown increasingly fast and strict since the CSRC made major changes to the review panel’s membership in October 2017, when CSRC Chairman Liu Shiyu vowed to reduce the backlog of IPO applications and improve the quality of companies who list on the exchanges.

“The review panel is the referee. It is necessary for it to unify some rules that require discretion,” said Wang Jiyue, a veteran sponsor of IPO applicants and current vice president of Huatai United Securities Co. Ltd., in a Monday column published on Caixin (link in Chinese). “It is also necessary to inform relevant agencies and companies of changes and tweaks to specific listing criteria. After all, a veto from the panel could be a life-and-death matter for a company.”

According to previous statement from CSRC spokeswoman Gao Li, the appointment of the new panel will take effect five days after the announcement, at which point the new members will take over from the current panel.