Xu Zhong: China Should Not Rush to Revamp Local Debt 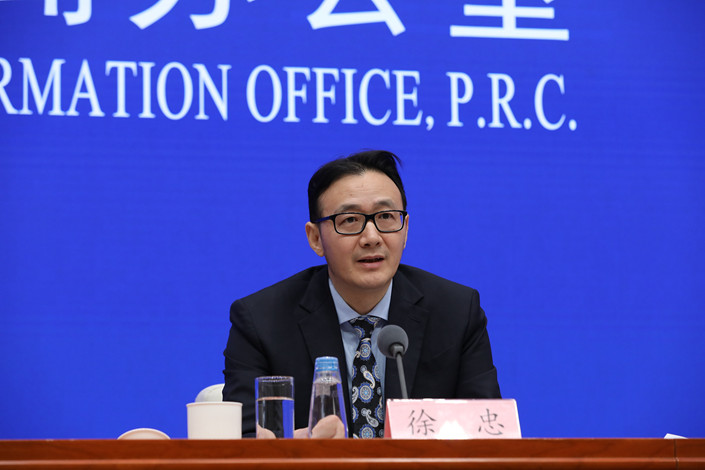 There are several significant features of China’s current economy: an economic transformation under the pressure of high leverage, a lack of effective demand caused by a one-size-fits-all deleveraging campaign, and slowing growth in total factor productivity (TFP) (Editor’s note: TFP is a measure of economic efficiency).

An economic transformation under high leverage requires a low-interest-rate policy, which can reduce the debt burden on businesses and their financing costs. Such a policy can help stimulate corporate investments and increase the return on investments, yet can also encourage companies to borrow more. Thus, only when the return of capital grows amid low interest rates, can a drop in the leverage ratio become possible.

Given that the lack of effective demand caused by a one-size-fits-all deleveraging campaign has become a major problem for China’s economy, I’d like to put forward some suggestions.

China needs to focus on the quality and efficiency of its investments. Based on our preliminary calculations, TFP growth has been steadily slowing since 2008 and remained relatively weak in recent years. The most significant cause is the decline in both investment efficiency and the growth in investment-specific technological progress. The underlying reason may be that government spending and property investments have crowded out investments by other sectors, especially those by manufacturing enterprises.

Last year, top policymakers at a Politburo meeting stated that “the current economic operation is stable with some changes,” indicating that downward pressure on economic growth had increased markedly. “Stabilizing investment” has since become a key measure. In this regard, China needs to balance the goals of short-term demand and medium- to long-term structural reform. The link between the two goals is effective investment management, especially when dealing with infrastructure investment and local government debt.

Since last year, China’s local government debt has been tightened too quickly, and growth in infrastructure investment has slowed. In fact, the risks of local government debt are controllable. China should instead be wary of the new risks posed by the process of handling risks. The core issue of the sustainability of local debt lies in net assets rather than in the scale of debt. Local governments have gained a large number of quality assets on the back of debts. Some quality assets can cover their corresponding debts, yet governments currently lack the channels to cash these assets. If China rushes to revamp local government debt, the prices of these assets would be under great downward pressure. Therefore, China should refrain from taking a one-size-fits-all approach to dealing with local debt, and allow qualified local governments in need of capital to raise debt in a market-oriented way.

Another major reason why TFP growth is slowing is the country’s declining demographic dividend. However, its influence will be greater in the long term, but limited in the short term.

Now China should properly understand the new economic situation. Both growth in the M2 (Editor’s note: M2 is a broad measurement of money supply) and the scale of total social financing will slow down as growth in potential output and the TFP slows. China should adapt to these changes, relying more on price adjustments to foster quality economic growth and to improve innovation capabilities. In the medium- to long-term, China’s economic development needs to focus more on the quality of investment rather than the quantity, and will moreover be affected by slowing technological advancement, an aging population, and external environment fluctuations. Economic growth will gradually slow and tend to stabilize.

China should also reform its financial system to adapt to a new growth model. In the long run, financial institutions should gradually shift their focus to new fields, including green development, 5G technology, education, health care and elder care services, away from SOEs, infrastructure and property investment.

Xu Zhong is director-general of the research bureau of the People’s Bank of China. This article is a translated excerpt of a speech that Xu delivered at a forum in Beijing on Jan. 12.