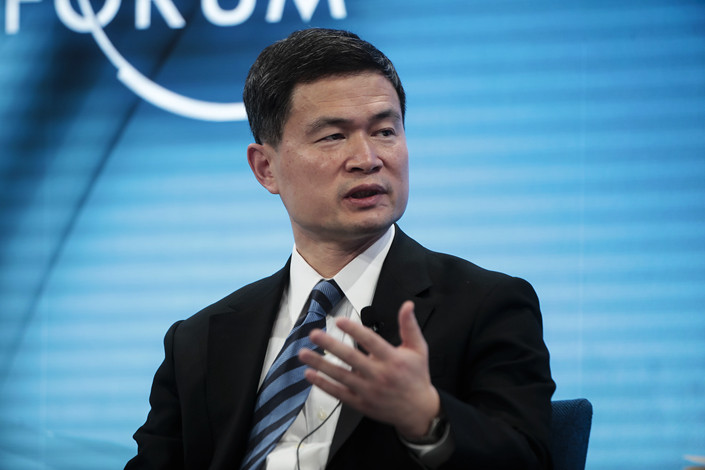 Fang Xinghai, vice chairman of the China Securities Regulatory Commission, speaks during a panel session on the opening day of the World Economic Forum in Davos, Switzerland, on Jan. 22. Photo: VCG

Markets and investors should not overreact to the economic slowdown in China, a senior Chinese regulatory official said on Tuesday, after a government report showed the world’s second-biggest economy saw its weakest expansion in almost three decades in 2018.

Growth will moderate to around 6% in 2019 from 6.6% last year but the slowdown is not a “collapse” and the government can and will use fiscal and monetary policy to support the economy, Fang Xinghai, a vice chairman of the China Securities Regulatory Commission, said at the World Economic Forum in Davos, Switzerland.

“The bottom line is that China is slowing down but it’s not going to be a disaster,” Fang said during a panel discussion on global financial risks. “The Chinese macro policy is very responsive and also is data dependent so as things unfold we will respond accordingly. The capacity of the Chinese government to respond to the economic slowdown is still very high. If anything we should not overreact.”

China’s gross domestic product (GDP) increased at the slowest pace since 1990 last year, data from the National Bureau of Statistics showed on Monday. The 6.6% gain compared with a 6.8% growth rate in 2017 and came amid a nationwide deleveraging campaign that’s hurt the private sector and investment spending by local governments, and slowing export growth exacerbated by a deepening trade conflict with the U.S.

The country’s leaders have already pledged to support the economy through a proactive fiscal policy and a flexible but prudent monetary policy, and Fang reiterated the government’s position.

“China’s macro policies are very data dependent,” Fang said. “At this point the government has already readied quite strong fiscal policy as well as monetary policy. If things continue to be challenging going forward on the fiscal side there is a lot of room to expand.”

“Some people worry about the overall debt in China,” he said. “To the corporate sector it’s a little bit too high but the government sector can still leverage a lot and we are already seeing local governments issuing more of what we call project bonds,” he said, referring to a category of local government debt formally known as special-purpose bonds, which must be used for specific purposes such as buying land reserves or financing infrastructure projects.

“The ability for the central government to borrow more is still very large,” he said.

China’s Ministry of Finance targeted a budget deficit of 2.38 trillion yuan ($350 billion) for 2018, implying a deficit to GDP ratio of 2.6%. Many analysts expect the government to raise that ratio to 3% for 2019 as it ramps up fiscal spending and implements further tax cuts to shore up the economy.

In a bid to stimulate growth, the standing committee of the national legislature approved in late December an early-than-usual schedule for local governments to issue new bonds. Normally, they don’t start to raise money from the debt markets until April, after the National People’s Congress approves the budget in March. But this year, several regions, including the Xinjiang Uygur Autonomous Region and Henan province, have already started to raise funds.

Fang said that although the main focus currently is on managing macroeconomic demand, the government has not stopped implementing supply-side structural reforms. China has opened up the financial sector to more international competition, allowed foreign companies to set up wholly owned plants rather than forcing them to form joint ventures, and cut import duties.

“So the supply side policy has continued and that’s a very important point,” he said.

Fang’s GDP growth forecast for 2019 is slightly lower than the 6.2% projected by the International Monetary Fund (IMF) in its latest World Economic Outlook released in Davos on Monday. The Washington-based lender maintained the forecast it made in October after taking into consideration measures taken by the Chinese government, including tax cuts and reductions in banks’ reserve requirement ratio, Gita Gopinath, the IMF’s economic counselor, said at a news conference to discuss the report.

However, despite the supportive policies, many analysts are forecasting growth will continue to slow in the first half of 2019, and only start to stabilize in the third quarter when the impact of the policies kicks in.

“Officials have stepped up policy support in response to faltering domestic momentum,” London-based research firm Capital Economics wrote in a report on Friday. “But with credit now growing at the weakest pace in more than a decade, the economy will not stabilize until at least the middle of this year.”