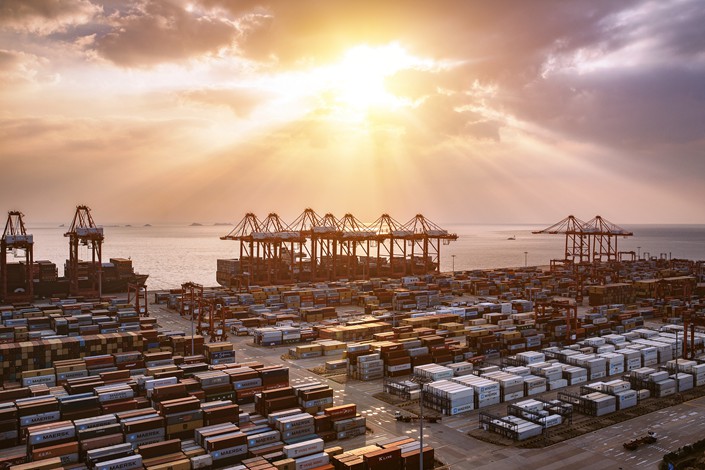 Uncertainty over the trade dispute with the U.S. is among the reasons that will likely force China’s government to set an economic growth target below this year’s level. Photo: VCG

China’s top leaders and officials are set to begin a key annual conference that will set economic policies for the year ahead against a backdrop of cooling domestic demand and ongoing trade tensions with the U.S.

Support for economic expansion is expected to emerge as the main priority for 2019, although the policymakers are likely to agree to lower the annual target for gross domestic product (GDP) growth in recognition of the headwinds, analysts said ahead of the Central Economic Works Conference (CEWC). The meeting is attended by top Communist Party and government officials.

Weakening domestic consumption, a struggling private sector and bloated state-owned enterprises (SOEs), sluggish growth in infrastructure investment, and uncertainty surrounding progress to resolve the trade dispute with the U.S. will probably force the government to set a GDP growth goal below the “around 6.5%” level targeted for 2018.

Analysts at Goldman Sachs expect the meeting will decide on a growth target in a range of 6% to 6.5%, while Shen Jianguang, chief economist at JD Digits, a spin-off of Chinese e-commerce giant JD.com, and analysts at Bank of America Merrill Lynch forecast an even less ambitious goal of “around 6%.”

To reach even that target, which would be the lowest since 1990, the government will have to provide significant support for the economy, and analysts expect the meeting to place bolstering growth at the top of the economic agenda for next year.

Clues about what will be discussed at the meeting and what’s in store for 2019 came on Thursday in a statement (link in Chinese) after a meeting of the Politburo, a committee of the 25 most senior Communist Party members. The Politburo gathering is often held days before the CEWC.

The leadership stressed they aims to “keep economic growth at a reasonable level” next year and ensure social stability, which they did not mention in the statement (link in Chinese) on a similar meeting a year ago. Although they reiterated the need to continue to fight the “three tough battles” of controlling risks, reducing poverty and tackling pollution, they did not elaborate on detailed goals about the work to deleverage the economy or reduce pollution as they did last year, suggesting the downgrade of the subjects on the government’s to-do list.

Leaders also called on officials to “enhance preparation for potential adversities” linked to “changes in the international environment and domestic conditions,” a veiled reference to the trade dispute with the U.S. While vowing to deepen market reform and further open up, which are probably meant to address foreign investors’ concerns, they also indicated a determination to press ahead with an initiative to upgrade the country’s industry despite U.S. pressure and boost domestic consumption. The two issues are seen as key points of leverage that China needs to secure in competition and bargaining with other nations.

“(We) should advance the high-quality development of the manufacturing industry … and cultivate the strength of the domestic market,” the statement said, urging the nation to “maintain strategic resolve.”

China has not raised its annual GDP growth target since 2005, a reflection of the sheer size of the economy, which makes it increasingly difficult to accelerate the pace of expansion, and the government’s strategy to shift the country’s growth model from one driven by investment and exports to a more sustainable path underpinned by consumption.

“We expect the government to effectively lower the growth target to a range of 6.0%-6.5%,” Goldman Sachs analysts wrote in a Dec. 5 report. “We believe there is a slight chance that the target will be kept unchanged, but we see this as a low likelihood scenario. This is because growth was already at 6.5% in the third quarter (of 2018) and has been facing clear downward pressures since then; we expect this will continue into next year.”

In the face of slowing growth and signs of stress in the financial system, the authorities have already eased up on their drive to deleverage the financial sector, launched an unprecedented campaign to help troubled private companies, and speeded up the issuance of local government debt to fund infrastructure investment.

The government will ramp up fiscal support and further relax its monetary policy stance in 2019 to prevent the deceleration in growth from slipping out of their comfort zone and causing massive layoffs that could endanger social stability, analysts say.

Economists at investment bank Nomura expect the government to set a higher budget deficit that will see the deficit to GDP ratio rise to 3% from a target of 2.6% in 2018. This will give the authorities room to continue cutting taxes, including the value-added tax (VAT), the corporate tax, especially for small and medium-sized companies, and social security levies.

Goldman Sachs and CICC, a Beijing-based investment bank, also expect the deficit target to rise to 3%. CICC forecasts an increase in the quota of special-purpose local government bonds to 2 trillion yuan ($290.7 billion) from 1.35 trillion yuan in 2018, which will help boost infrastructure investment.

Economists at Morgan Stanley expect VAT cuts to be made as part of a “relatively loose” overall policy stance to restore business confidence.

The CEWC “could set a ‘precautionary loosening’ policy tone for 2019, and the March NPC could shed light on the exact magnitude of fiscal easing ...,” they wrote in a report earlier this month.

Policymakers are considering scaling back the target for fiscal revenue growth at the central government level to zero for next year from 5.2% this year (link in Chinese), indicating “large-scale tax cuts are in the making,” a source with knowledge of the matter has told Caixin. But officials are still divided over whether to lower VAT or income tax rates, sources said.

Goldman Sachs analysts said other policy support measures could include more cuts to banks’ reserve requirement ratio and interbank interest rates on the monetary policy front, regulatory forbearance such as relaxing pollution curbs, and a loosening of controls on the property market.

The CEWC’s decisions or comments on the real estate market and policies will be particularly important, given the industry’s significant contribution to GDP, CICC analysts said.

But fiscal and monetary stimulus won’t be enough to put the economy on a sustainable path, analysts say.

“(C)onventional easing measures may not be able to solve many of the problems resulting from nonmarket-based policy measures and interventions imposed on the economy in the past several years,” Nomura’s analysts wrote. “We believe that unshackling the economy via market-oriented reforms is once again the key to releasing growth potential.”

Slowing growth and the trade war with the U.S. will likely push the government to speed up market-based reforms including an overhaul of bloated SOEs. President Donald Trump’s administration has accused Beijing of operating “unfair” industrial policies such as government subsidies, forcing foreign investors to transfer technology and failing to open its markets to foreign companies.

“In accordance to China’s long-term plan and as part of the trade negotiation, we think the Chinese government may tilt policies a bit more towards market reform” in the CEWC meeting and to mark the 40th anniversary of the reform and opening up policy, UBS economists wrote in a Dec. 10 report. China will celebrate the milestone on Tuesday.

“Additional corporate tax cuts, SOE reform measures, and further opening of market access to private and foreign investors may be announced,” they wrote.