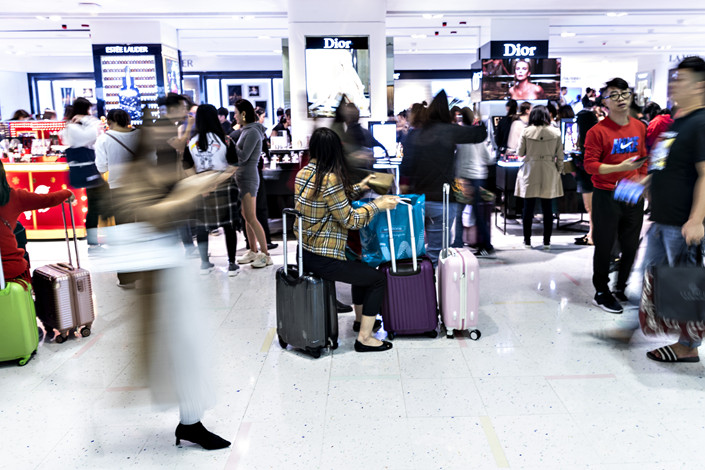 A big part of China’s rapid retailing growth has been fueled by e-commerce, which has lower overhead and is more easily scalable than traditional brick-and-mortar stores. Photo: VCG

*China’s retail sales are expected to grow 7.5% this year, which will take it past the U.S., a new report predicts

*Much of this growth has been driven by e-commerce, which by the end of this year will make up over a third of all retail sales in China, compared to around a tenth in the U.S.

(Beijing) — China is expected to overtake the U.S. this year to become the world’s largest retail market, propelled by the country’s three-decade economic boom that has spawned the top global e-commerce market, according to a new report published on Wednesday.

At the same time, Chinese e-commerce leader Alibaba Group Holding Ltd. is expected to see its market dominance continue to erode in the years ahead, as it faces challenges from newer rivals like up-and-comer Pinduoduo Inc., according to the report from digital marketing research firm eMarketer.

At the global level, China’s total retail sales are expected to grow 7.5% this year to $5.636 trillion, eMarketer predicted. That would take the country past the U.S., which is expected to see retail sales grow 3.3% to $5.529 trillion. While growth is slowing in both countries, eMarketer said China’s rate of increase is expected to outpace the U.S. through 2022.

“In recent years, consumers in China have experienced rising incomes, catapulting millions into the new middle class,” said Monica Peart, senior forecasting director at eMarketer. “The result has been marked rise in purchasing power and average spending per person.”

China is now the world’s second largest economy behind the U.S., following years of breakneck growth that has only recently begun to slow. And with more than four times the population of the U.S., it has strong consumer power as well, even though its average citizen earns about one-sixth as much as the average American, according to the latest data from the International Monetary Fund.

A big part of China’s rapid retailing growth has been fueled by e-commerce, which has lower overhead and is more easily scalable than traditional brick-and-mortar stores. That boom partly owes to China’s lack of an established traditional retailing sector due to the country’s socialist past, combined with Beijing’s heavy investment over the last three decades in telecom networks, roads and other infrastructure that facilitate e-commerce.

E-commerce still accounts for just a small portion of all retailing in the U.S., expected to make up about 10.9% of sales this year. By comparison, e-commerce is expected to grow more than 30% this year to account for 35.3% of the overall China market, eMarketing said. It predicted China would account for well over half of all global e-commerce sales by the end of this year, well ahead of No. 2 player the U.S. with 17% of all e-commerce sales.

Within China’s massive e-commerce sector, eMarketer predicted that industry leader Alibaba will continue to dominate the market with more than half of all share through this year. But it and No. 2 player JD.com Inc. are slowly seeing their share eroded amid a challenge from newer rivals, most notably recently-listed bargain e-commerce site Pinduoduo.

This year Alibaba is expected to command 53.3% of China’s total e-commerce market, down from 58.2% last year. JD.com’s share is expected to be largely unchanged at about 16%, while Pinduoduo’s is expected to rise sharply to 7% from 4.5% in 2018.