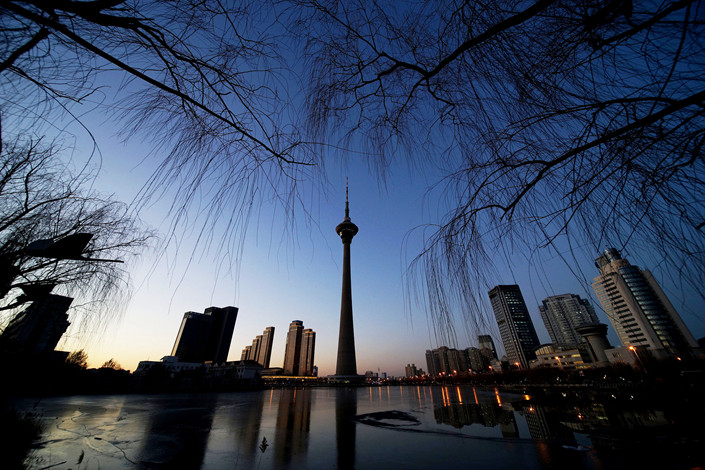 Of the eight regions predicting slowdowns in economic growth, the northern port city of Tianjin set the lowest target for growth this year. Photo: VCG

Eight provincial-level regions including Beijing have predicted slower economic growth this year after many failed to reach their 2018 targets, in the latest sign of a worsening economic outlook for the world’s second largest economy.

As of Wednesday, 12 regions had released growth targets for this year at their annual legislative sessions, including eight that forecast slowdowns from projections for 2018, according to Caixin’s calculation based on government documents.

One of the steepest decline predictions came from the Xinjiang Uygur autonomous region. It forecast growth of around 5.5% in its regional GDP this year, down from a projection of around 7% for 2018.

Of the eight regions predicting slowdowns, Tianjin set the lowest target for growth this year. The government in the northern port city bordering Beijing forecast its economy would grow around 4.5% this year, down from a 5% projection for 2018.

Tianjin’s actual economic growth last year was even lower than projected, coming in around 3.6%, the lowest among the 19 provincial-level regions that have so far released data on their actual growth.

Of the 19 regions, 10 failed to reach their regional GDP growth targets that they had set for 2018, according to Caixin’s calculation. The actual economic growth rate of the southwestern city of Chongqing came in at 6% last year, much lower than its earlier projection of around 8.5%, and well below its actual growth of 9.3% in 2017.

Despite the downbeat numbers, Central China’s Hubei province provided a rare positive outlook. It was the only province so far to project a higher growth rate this year than last year. It predicted a growth rate between 7.5% and 8%, compared with a projected growth rate of 7.5% last year. Its actual growth came in at 7.8% in 2018.