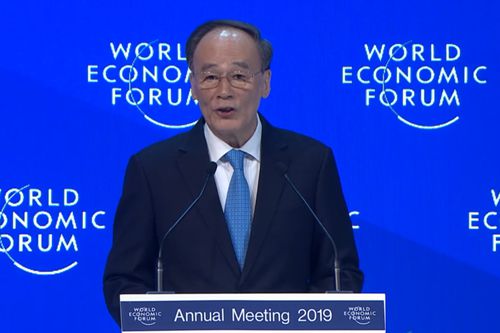 (Davos, Switzerland) — China's Vice President Wang Qishan urged the world not to turn its back on globalization but to work together to address the imbalances that have stoked opposition to increasing integration and interaction in many countries.

Blaming others will not solve these problems, Wang said in a speech Wednesday at the World Economic Forum (WEF) in the Swiss resort town of Davos. Instead, governments need to deal with domestic resentment by pursuing structural reforms, maintaining growth and achieving more equality in income distribution, he said.

“The fundamental solution is that in making the cake bigger we need to weigh fairness and efficiency, so governments of all countries must take all measures to… stop inequality from widening,” Wang said in response to a question from Klaus Schwab, founder and executive chairman of the WEF. “In that way, groups whose interests have been affected by inequality linked to globalization will gain some protection, which will lead the anti-globalization tide to ebb and the trend (of integration) to continue to thrive.”

Wang spoke as Chinese and U.S. negotiators race to meet a March 1 deadline to avert an escalation in their bilateral trade dispute. The row has gone beyond tariffs to encompass issues including intellectual property theft, and Beijing’s policies on upgrading the country’s industrial base, notably in high-tech manufacturing.

China’s growth has been achieved through its own hard work, not through having it presented on a plate, Wang said, taking a sideswipe at the view that China owes its prosperity to accommodation by the West in the hope of assimilating it into the Western-dominated political and economic order.

China has travelled down the correct path, Wang said. It will focus on tackling its own problems by deepening reform and further opening its markets, he added.

The Chinese economy, the world’s second largest, expanded 6.6% last year, the slowest rate in nearly three decades, a government report showed Monday. Growth prospects this year in the country and the world have been clouded by concerns that trade negotiations with the U.S. will fail and that the dispute will escalate.

Describing himself as an optimist, Wang said China’s growth rate last year was solid and stressed that Beijing has prioritized structural reform, quality, and efficiency over speed. He reassured international investors that the Chinese economy will continue to grow in the long run despite uncertainties this year.

“Despite all sorts of risks, challenges and difficulties, there is no question that we will achieve the target of building China into a moderately prosperous society in all respects by 2020,” he said, referring to a long-standing goal of the ruling party to raise living standards and ensure most people live relatively comfortably. Linked to that is a commitment by the Chinese leadership to doubling gross domestic product and per capita income from 2010’s level by the end of the decade.

“No matter the uncertainties we face in 2019, there is one certainty – China’s development will be sustainable.”

In his speech, Wang said that globalization was mainly driven by multinational corporations and financial institutions seeking to maximize their own gains by shifting their supply chains to low-cost locations and China did benefit from the process. China is now ready to contribute to world growth with its vast market and increasingly affluent consumers, and is willing to work with other countries to handle problems arising from globalization, he said.

The nation is seeking to create a “community of shared future for mankind” and promote international cooperation, Wang said.

A community of shared future for mankind is a Chinese concept that was promoted by Xi in a speech delivered to the 70th Session of the United Nations General Assembly in 2015 and again in a speech to the World Economic Forum in 2017. The goal is to get rid of the Cold War mindset and power politics in international relations, solve disputes and differences through dialogue and consultation, and work in a concerted manner to deal with conventional and non-conventional security threats. It also calls for liberalization of trade and investment to make economic globalization more open, inclusive and balanced, urges respect for cultural pluralism and seeks international cooperation to tackle climate change.

Wang is leading an unusually large Chinese delegation to Davos that includes 25 government officials at or above vice-ministerial level. Hopes were high that he would meet with U.S. President Donald Trump during the forum before Vice Premier Liu He heads to Washington for the next round of trade talks. But the U.S. delegation’s trip to Davos was called off days before the forum started due to the partial U.S. federal government shutdown.

Wang was vice premier in charge of economic and financial policymaking and then took the helm of the ruling Communist Party’s anti-corruption agency as Xi’s right-hand man, before officially retiring from the seven-man Politburo Standing Committee at the end of 2017. He is now a member of the Central Foreign Affairs Commission, the body that oversees China’s diplomacy. Analysts say his extensive experience dealing with Western officials and business leaders, and his close relationship with Xi make him the right pick for his latest position.

“I think that Wang is a better choice for explaining China’s numerous problems with the outside world,” David Zweig, chair professor and director of Center on China’s Transnational Relations at Hong Kong University of Science and Technology, told Caixin. “He understands Western bankers and business people well, has hobnobbed with many of them.”

“If he says something, people will assume it reflects Xi Jinping’s own ideas and that China will carry them through,” said Zweig.