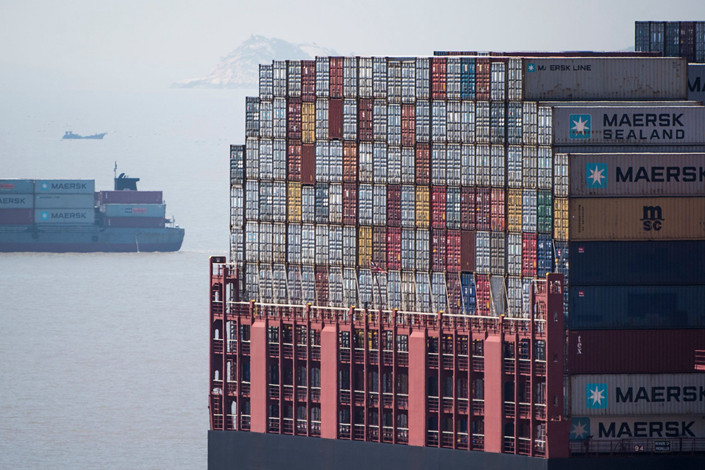 A U.S. cargo ship at the Yangshan Deep-Water Port in Shanghai on April 9. Photo: VCG

What you just read probably sounds nuts. Economists everywhere warn of tariffs’ negative impact, invoking comparisons to the 1930s, when huge global tariffs contributed to the West’s economic depression. Stock analysts are sure the so-called “trade war” is why the shine is off global stocks outside China, which have surrendered most of their year-to-date gains. But most pundits presume China will suffer most. They fret Trump is trying to prevent China’s ongoing economic development. That’s why, they claim, the Shanghai index is down 19% this year. Shenzhen is worse, down 25.8%.

Tariffs are negative. A tax on imported goods. Consumers in the nation implementing them usually end up paying higher prices as a result. They can interrupt the global supply chain by adding costs and friction. Exporters can be whacked too! Hence why tariff fears seem to stoke global volatility and weigh on China’s stock market. And lead many to fear economic problems await. But China’s stock swoon seems disconnected from economic reality — a move based on fear. Not fact.

For example, when China posted 6.5% gross domestic product (GDP) growth in the third quarter — the slowest in a decade — some blamed tariffs. But this is a little odd. First, consider trade. Exports rose 15.6% year-on-year in October, accelerating from September. Exports to the U.S. rose 13%, though demand was broadly strong — particularly in Asia.

Rather than trade, most of the slowdown seems tied to the government’s ongoing efforts to rein in “nonstandard financing activities,” including credit issued outside formal bank loans. While containing these financing activities helps promote financial stability, regulatory officials have noticed many private firms faced diminished access to funding, which slowed their growth. Policymakers have already deployed targeted stimulus to offset the slight drag, and they recently announced a slate of reforms to offer further assistance.

Now, many fear that the strong trade growth was the result of companies front-running the tariffs — which means delayed pain is on the way. Even if that’s true, I doubt it leaves a mark. To see why, scale Trump’s tariffs — and the global retaliation to them. To date, Trump has taxed about half of U.S. imports from China at rates ranging from 10% to 25%. But he’s threatened more, so let’s overestimate. In 2017, the U.S. imported 3.51 trillion yuan ($517 billion) in goods from China. If Trump taxed them all at a flat 25%, tariff payments would be 877.5 billion yuan.

Seems big! But nominal Chinese GDP was 82.7 trillion yuan in 2017. If the economy matches the government’s 2018 target and grows 6.5% — plus another 2.5% for inflation — GDP would grow by 7.4 trillion yuan this year. That means our inflated estimate of tariff payments amounts to just 1.1% of Chinese GDP and 11.9% of expected growth. Small! Even if we presume tariffs erase all 877.5 billion yuan in value, Chinese GDP would still grow by over 6.5 trillion yuan in 2018. So, all else equal, instead of 9% nominal growth, you’d get 7.9%. No calamity. Most nations would love to see nominal GDP grow 7.9%.

All this also presumes these tariffs are paid in full. Unlikely. Bilateral tariffs like these encourage substitution and re-routing — tariff dodging. For example, consider China’s retaliatory tariff on U.S. soybeans. Chinese soybean imports from America fell by 80% year-on-year in September. Ouch! But Chinese consumers and businesses didn’t just stop using imported soybeans. They substituted, buying beans from Brazil, the world’s second-largest grower, instead.

China’s shift depressed U.S. soybean prices, causing temporary pain. But with time, brokers will likely see these lower prices — and swoop in. They’ll buy up beans on the cheap and ship to a third party. While the scale hasn’t replaced Chinese demand yet, new partners are emerging for these American beans. Ironically, Brazil is among them! They buy cheaper American beans and either re-export them or sell them domestically. This could easily be behind the uptick in Asian demand for Chinese exports, too. Hence, even the very small impact the tariffs would have if paid in full won’t happen.

Finally, tariffs are just a tax. A tax on trade isn’t any worse than most other taxes. Countries raise other taxes often! Yet few fear them causing global bear markets. Nor should they — tax revenue gets redistributed, not deleted. Hence big tax increases create debate — not doom.

The small scope and easily dodged nature of tariffs highlights a reality: Viewing Trump’s moves as economic policy is a mistake. This isn’t about trade deficits. It’s not about jobs, either. Nor is it a rejection of globalization. If it was, tariff rates would be far higher. Like most American political policy debates, think of this in terms of the next election — now 2020’s presidential race, when Trump seeks re-election.

Key to Trump’s 2016’s victory: motivating voters in America’s industrial Midwest who have long been skeptical of trade. He told them America had been treated unfairly by trade partners. Not just China! He took shots at the EU, Japan, Mexico and Canada. Trump will need those voters again in two years — and he knows it. China knows it, too, which is perhaps why China’s retaliatory tariffs targeted industries in states Trump will need to win to secure re-election in 2020. Don’t be shocked if a relatively minor U.S.-China handshake ends this whole saga, with both sides able to claim victory.

For stocks, fear of a false factor is always bullish. When investors realize the “trade war” that terrified them is less than feared, relief should wash over markets. Particularly the areas investors sold most heavily out of fear. That means China. Specifically it means materials and industrial firms — hardest hit in the tariff terror. While China is indeed shifting from heavy industry to services and consumption, as the head of Polish copper miner KGHM Polska Miedz SA recently told the media, “There is a lot of support for Chinese growth coming from the One Belt One Road initiative and infrastructural investments in the mid-western part of China.” That reality, paired with the selloff, is a bullish disconnect. A buy signal. Technology, too, has been hard hit, giving you a chance to buy fast-growing firms at a discount. However, domestically focused industries like financials and utilities fell much less than others. They should bounce too, but less than those harder hit.

Legendary American investor Warren Buffett once famously said, “Be greedy when others are fearful.” There is sense in that for equity investors — and it applies to Chinese stocks now. But I think a slight tweak makes sense too: Be greedy where others are most fearful.