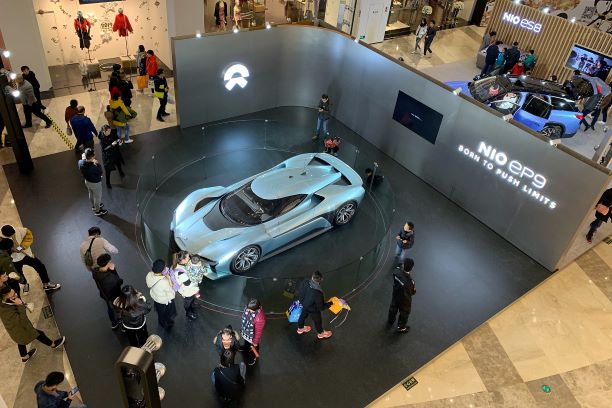 A “smart car” made by China’s Tesla rival Nio was a hit on social media on Tuesday, as jokes spread that Nio’s artificial intelligence might not be so intelligent.

The breakdown of a Nio car caused a traffic jam after the car was stuck for more than an hour on Beijing’s central Chang'an Avenue, the road that passes between the Forbidden City and Tiananmen Square. Chang’an Avenue is heavily policed, as its importance means the capital considers it a potential target for terrorist attacks.

The incident occurred after people in the car – two of them potential customers taking it for a test drive – tried to update its operating system, according to a screenshot posted on Weibo that has since gone viral. The update caused the car to shut down, locking its passengers inside and causing traffic on the iconic avenue.

A person familiar with the customers inside said that none of them were able to roll the windows down. The sudden shutdown on the major road then attracted several groups of police, who approached the vehicle for clarification on the situation, the person said.

Smart cars are sometimes called “smartphones on four wheels,” as they are often enabled by Android-like in-car operating systems. The up-and-coming startup Nio has long touted its own operating system as one of its selling points – which is why so many internet commenters found its breakdown so ironic.

Nio responded that the accident was caused by the "continuous wrong operations" of the car’s driver in a post on Weibo on Tuesday.

Caixin has since learned from the company that a Nio employee accompanied the customers during the ride. It's not clear if the “wrong operations” were the result of instructions from the Nio employee.

Commenters on Weibo joked that the incident was caused by "stupid artificial intelligence."

Nio said that it will update cars’ notification settings so that drivers know to update their operating systems while safely parked in the future.