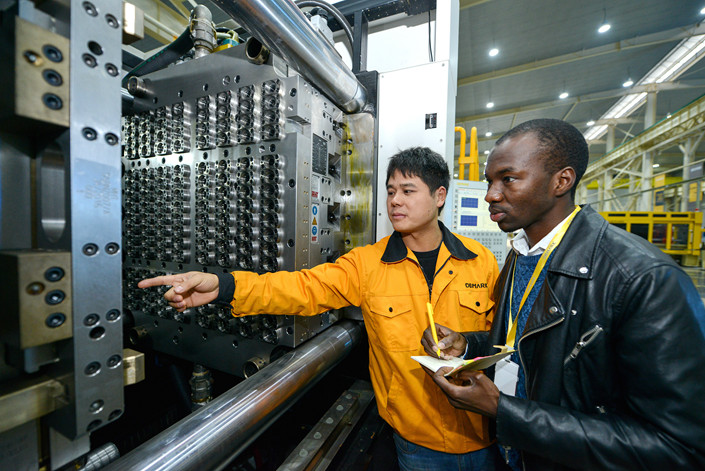 A businessman from Niger learns about the products produced at a factory in Changxing county, Zhejiang province, on Nov. 14. Photo: VCG

Chinese lawmakers have recently debated how to bridge the difference between domestic law and international treaties, as they ended a two-day deliberation of a draft law on foreign investment on Wednesday.

The debate among the members of the Standing Committee of the National People’s Congress (NPC), China’s top legislature, comes as legislators are working to quickly make a new law on foreign investment. The nation’s protection of its domestic industries has long faced complaints from the U.S. and Europe, and is one of the key issues in the ongoing trade war with Washington.

Many international treaties and agreements that China has concluded or participated in have set rules for the treatment of foreign investors. Even if these rules are not specifically included in the new foreign-investment law, they should still be applied to foreign investors, according to a clause in the draft law.

This clause, which seeks to coordinate practice between domestic law and international treaties and agreements, has raised discussion among lawmakers.

During the deliberation on Tuesday, Qian Fangli, a member of the NPC’s financial and economic affairs committee, suggested deleting this clause, Caixin has learned from sources who attended the event.

China has concluded bilateral investment agreements with more than 130 countries and regions over the past years, yet the rules across the agreements are fragmented overall, Qian said. If these international rules are directly applied to foreign investors, rather than these rules being written into national law, they will make the upcoming foreign investment law irrelevant to a large degree, she said.

Instead, she suggested revising related domestic laws in a bid to balance the implementation of international obligations and the unification of China’s legal system.

A more-conservative proposal came from Wan Exiang, a vice chair of the NPC’s Standing Committee. He proposed refining the clause, the sources said. The clause should specify that only rules in international treaties and agreements that provide more-preferential treatment than the domestic law does should be applied to foreign investors in China, Wan said. This should apply only to rules related to market access, he added.

So far, the Standing Committee of the NPC has completed two deliberations of the draft foreign investment law, with the first in December. The NPC will collect public comments (link in Chinese) on the draft law until Feb. 24, according to its website. During its annual session in March, all NPC members will deliberate the draft law.

Once adopted, the law will replace three existing laws on different types of foreign-funded companies in China, laying a new legal foundation for foreign investment.

The existing laws were made in the late 1970s and 1980s. Despite some revisions, the laws can no longer meet foreign investors’ demands, particularly in terms of investment protection and fair competition. Businesses from the U.S. and Europe have long complained about market-access restrictions and unequal treatment in China.

The ongoing Sino-U.S. trade war has driven Beijing to accelerate the pace of reform in this area, multiple economists said. In the draft foreign investment law, China has said it will prohibit local governments and officials from forcing foreign companies to transfer their technology to their Chinese counterparts. Forced technology transfers were one of the issues that triggered the trade war.

Foreign direct investment on the Chinese mainland, excluding banking, securities and insurance investment, hit a record $135 billion last year, up 3% from 2017, according to data (link in Chinese) from the Ministry of Commerce.