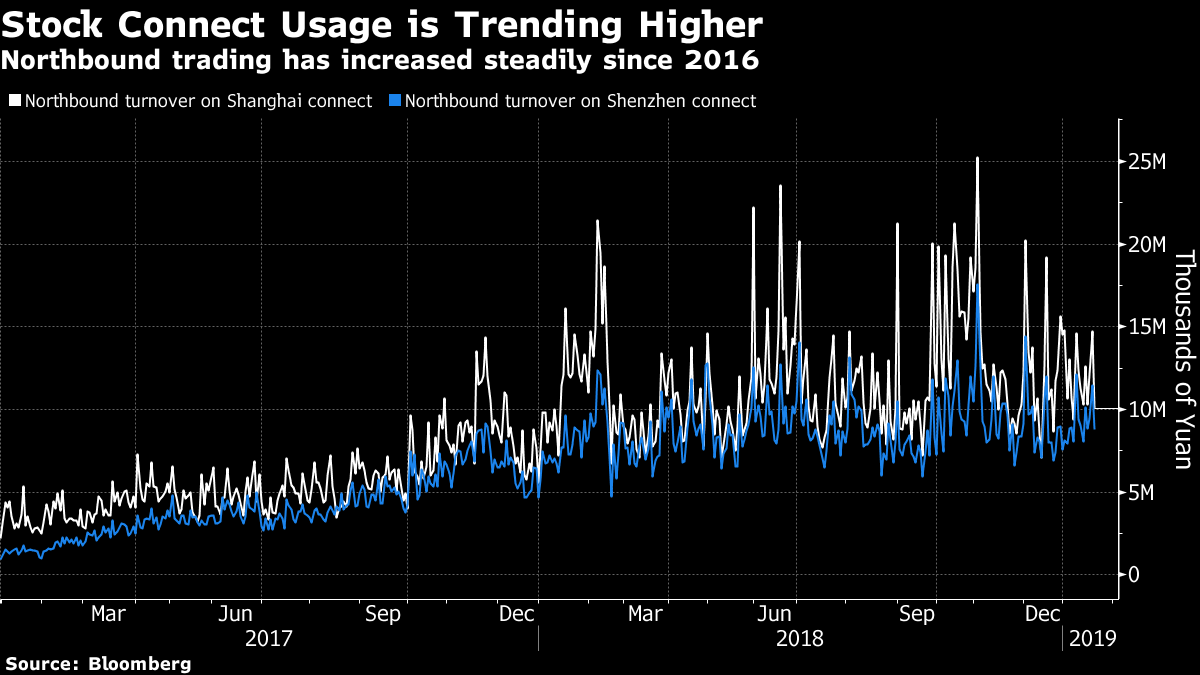 (Bloomberg) — Wall Street firms are preparing to lobby China for changes that would make it easier to bet against its stock market through a trading link from Hong Kong, one of several changes the institutions want as Chinese equities become an ever-growing part of global portfolios.

Societe Generale SA said it’s among the banks seeking a relaxation of rules that restrict lending of shares listed in China, a prerequisite for short selling. Citigroup Inc. and Morgan Stanley are also pushing for measures that include clearances for block trades and fewer closures of the stock connect with Hong Kong around public holidays, according to people familiar with the matter.

Lyndon Chao, head of equities at the Asia Securities Industry & Financial Markets Association, which is arranging meetings with regulators and exchanges to discuss the changes, said Chinese officials are aware of steps that are needed to attract more foreign participation. While the market was last year focused on preparing for China’s inclusion in MSCI Inc.’s global indexes, this year’s agenda is a renewed focus on ways, such as short selling, that will make it easier and less risky to trade on one of the world’s biggest stock markets.

“We see a new frame of mind in China, embracing international frameworks and standards around trading processes,” Chao said. He cited the Chinese securities regulator’s Jan. 31 proposal to allow short selling on a less preferred route for foreign stock buyers to use.

International investors say the lack of adequate tools to bet both ways on market direction leaves them without a hedge for China, making them vulnerable amid volatility.

The recent proposals stem in part from a Hong Kong Exchanges & Clearing Ltd. consultation that ended in January. They include widening the pool of firms able to lend out stocks, one of the people said, asking not to be identified as the details are private. Talks could extend beyond 2019 and there is no certainty the changes will be approved, the person said.

HKEX is constantly exploring ways to improve the stock connect it oversees with exchanges in Shanghai and Shenzhen, a spokesman said by email. Representatives for Citigroup and Morgan Stanley declined to comment.

While short selling is legal for onshore traders in China, curbs were imposed after the crash of 2015 that authorities blamed on short sellers, and currently only the shares of large companies are permitted to be lent out. Chinese investors can also hedge onshore index futures. Neither option can be easily done through the Hong Kong trading links.

There hasn’t been a single short sale of Shanghai or Shenzhen stocks through the connect program over the past month, exchange data show. Index compilers including MSCI Inc. have said stock connect is the preferred route for international investors wanting to trade Chinese equities. Money managers using the connect can trade through a Hong Kong licensed broker, while the other main access route to onshore stocks, the Qualified Foreign Institutional Investor program, requires registering with authorities in China.

“Part of the argument is to show lending and borrowing also helps your operational efficiency,” he said.