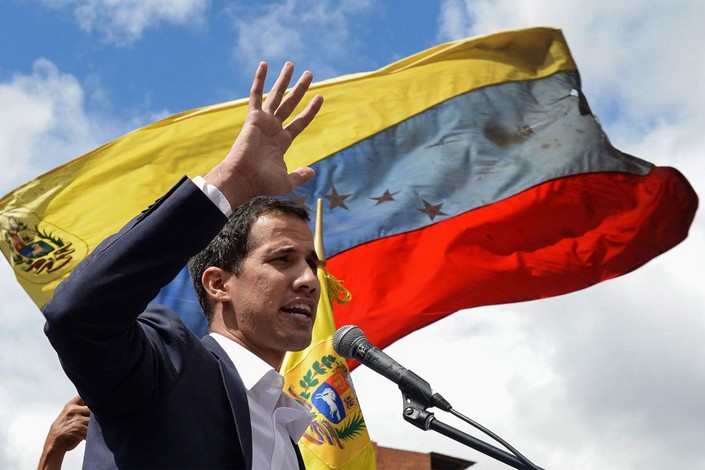 For the young politician trying to get rid of Venezuela’s authoritarian leader Nicolas Maduro, a key question is how to deal with China. Potential new leader Juan Guaido is saying he’s ready to start a “constructive” relationship with China, while Beijing is also saying it hopes to keep communication channels open with a key South American ally that is one of the world’s biggest oil exporters.

Venezuela has been rocked by economic and political turmoil since Maduro took over the presidency after the death of populist leader Hugo Chavez in 2013. A series of western countries, including the U.S., recently recognized Guaido as the country's president following violent street protests disputing Maduro’s second presidential term, which began on Jan. 11.

Beijing has for decades been a heavy investor in Venezuela – under Maduro and Chavez before him – and a buyer of its oil. Its presence also gives it the chance to needle the U.S. in a region America considers its strategic backyard.

If Guaido, now leader of Venezuela’s National Assembly, comes to power, he will face a shattered economy with large reconstruction needs. Countries like China, with deep pockets and patience on investment returns, can help.

“We are ready to begin a constructive relationship and dialogue with China as soon as possible,” Guaido told Bloomberg in an interview. That said, he also wants a reset in ties. He called for a more “transparent relationship,” adding any prior deals with China would be honored – if they were lawfully done.

China is likely to be open to talks. At a regular press conference on Friday, Chinese Foreign Ministry spokesman Geng Shuang emphasized that “China maintains close communication with all parties” and would “work together to create favorable conditions for the proper resolution” to the situation. No matter how the situation changes, the China-Venezuela relationship “should not be damaged,” Geng said.

Even so, Guaido will need to tread carefully to avoid antagonizing the U.S., which has become his vocal supporter. While both countries present an opportunity for a post-Maduro Venezuela, the worst outcome would be to get caught in a tussle between the major powers for influence.