China Rejects U.S. Accusations That Its Lending Is a ‘Debt Trap’ 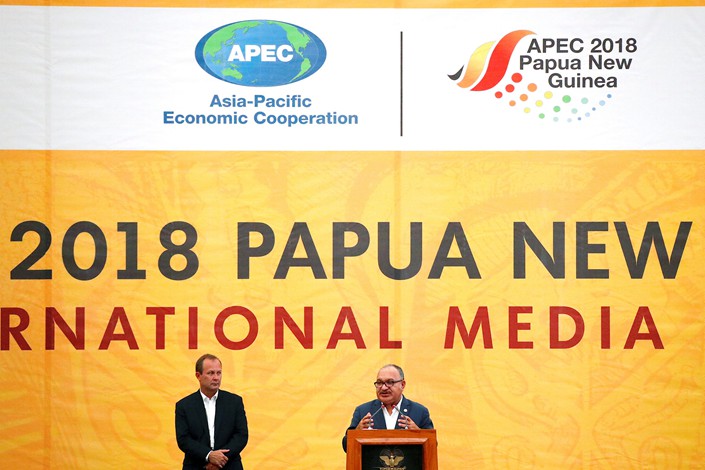 Debt associated with Chinese projects overseas was once again in the spotlight this weekend, with the U.S. warning countries about the supposed strings attached to such projects and the new president of the Maldives implying he would pivot his indebted country away from Beijing and toward New Delhi.

China’s Foreign Ministry responded to concerns Sunday, with a spokesperson saying, “No developing country has ever run into debt problems as a result of working with China,” and that “Cooperation with China has been widely welcomed by the governments and people of developing countries.”

The annual meeting of the 21 countries that form the Asia-Pacific Economic Cooperation (APEC) group failed to put out a joint statement for the first time in its history at its meeting this weekend, with reports suggesting tensions between the U.S. and China were to blame.

U.S. Vice President Mike Pence took a direct swipe at China during a speech on Friday, telling attendees they should “not accept foreign debt that could compromise your independence,” and that U.S. support “is a better option.”

“We don’t coerce, corrupt, or compromise your independence, ... and we don’t offer a constricting belt or a one-way road,” Pence said.

The remarks were a clear reference to China’s Belt and Road Initiative, which aims to develop infrastructure abroad with the support of Chinese companies and financing. This year has seen a backlash against Chinese lending associated with the Belt and Road, particularly in Malaysia, Sri Lanka, Pakistan and the Maldives, due to the hefty debt that recipient countries can be saddled with, with Chinese loans now often accused of forming a “debt trap.”

Yet more bad news came for Beijing a day before, when Ibrahim Mohamed Solih was sworn in as the new president of the Maldives. Solih said at his inauguration Saturday that his country had been “looted” by his predecessor, who had been close to China, with his transition team saying that the country’s debts to China stood at around $1.5 billion, about a quarter of the country’s gross domestic product. Solih has previously criticized “Chinese colonialism,” and the government suggested it would move much closer to New Delhi in a joint statement.

“(Indian) Prime Minister (Narendra) Modi attending the swearing-in of President Solih signals proactiveness on India’s part, after becoming worried over the increasing deals Maldives was signing with China under the previous dispensation,” said Sriparna Pathak, an assistant professor of political science at Nowgong College in India. However, “while Maldives may make attempts to deal with the debt trap it is in with China, completely negating trade with China is impossible. China currently accounts for the Maldives’ largest import bill — an estimated $320 million in 2016. But China also contributes to the Maldives’ coffers as the largest supplier of tourists to its luxury resorts,” she added.

There was a bright spot for Chinese foreign policy over the weekend, with the Pacific island nation of Tonga officially signing up to the Belt and Road, Reuters reported. Yet this too appears to be colored by debt issues, as the country received an extension on the payment of $115 million in debts, Reuters said.

Chinese lending provides capital for much-needed infrastructure development, Moody’s wrote in a report on China’s lending to sub-Saharan African countries last week, noting that the region has an annual gap of between $67.5 billion to $107.5 billion in the financing it needs and the financing it receives. However, it also noted that repaying these debts could prove particularly tough for indebted nations such as Angola and the Republic of Congo over the next decade. “While there is evidence of some willingness of Chinese lenders to renegotiate loans, China’s response to SSA sovereigns that face liquidity pressure is not uniform or transparent,” it added.

Rather than seeing Chinese loans being a “debt trap,” Chinese overseas financing is largely motivated by a “a mixture of incompetence and wanting to secure strategic assets,” said Christopher Balding, an expert in China’s economy and an associate professor at Fulbright University Vietnam. “If you look at a lot of Chinese investment in China, a lot of projects have little to no planning done, with poor research, due diligence, but are done to do something — with the expectation that they will come and now we have shiny new infrastructure. I think that is a lot of what is happening elsewhere, but now China expects to get paid back on time, whereas in China they just roll the debt forever.”

Securing strategic assets such as oil and gas supplies and the metals needed to support the development of its domestic advanced industries is also another key concern, Balding said. “If you look at their foreign investment, it matches things like the industries or strategic needs Beijing says they need, whether it is commodities or what industries they want to export. Most places have no use whatsoever for high-speed rail, but they are being sold because that is what Beijing wants to export. Angola is the major Africa debtor because they have oil. Go down the list, there is a very clear strategic reason.”

Beijing also uses leniency with its debts as a means to garner foreign support abroad, a recent report by AidData said, noting that China announced a $90 million debt-forgiveness package for Cambodia after the latter used its position as chair of the 2016 Association of Southeast Asian Nations summit to block a joint statement critical of China’s actions in the South China Sea.

This does not amount to loans being used to deliberately “ensnare” countries in debt, however, as unpaid loans are fundamentally a major headache for Beijing, said Matt Ferchen, a specialist in China’s political-economic relations at the Carnegie-Tsinghua Center for Global Policy, in a recent piece. Citing China’s relationship with the troubled regime in Venezuela as an example, China has given more than $60 billion in loans to the country since 2007, which “fed into the Venezuelan government’s own disastrous appetite for unsustainable and unaccountable debt.” While Venezuela is an important source of oil for China, the country’s volatility has helped to raise the price of China’s own oil imports and disrupted its oil shipments, Ferchen said.

Rather than simply being about trapping countries in debt, recouping what it has lent is a “huge problem” for China, Balding said, as it would be difficult turning loans into aid or concessional loans, at a discount from ordinary rates. “For (Beijing) to start writing any significant part of this off is going to be a huge problem, not to mention the enormous political cost it would carry,” he added.