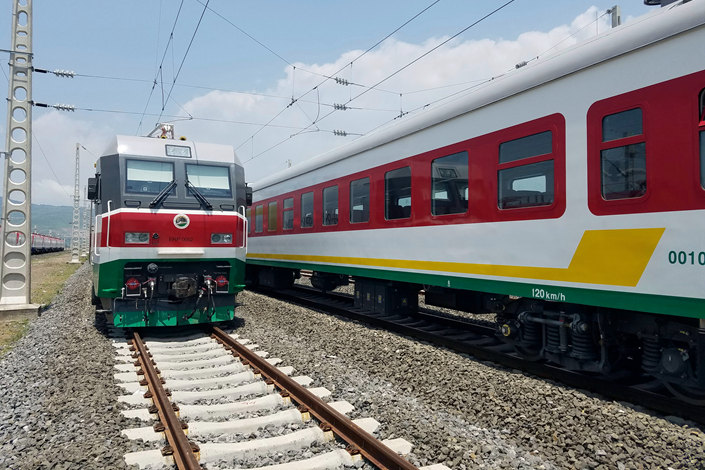 Locomotives for the Ethiopia-Djibouti electric railway line up outside a train station in the outskirts of Addis Ababa, Ethiopia, in September 2016. Photo: IC

China’s massive, murky lending to sub-Saharan countries, though good for growth, increases their credit risks and can also obstruct alternative sources of loans, according to a report from Moody’s.

Countries deemed to be risky by rating agencies like Moody’s have a tougher time getting loans, have to pay higher interests on them, and are less attractive to foreign investors as there is a higher chance they will default. They can also lead to a political backlash. This year has seen a backlash against Chinese lending in countries that include Malaysia, the Maldives, and Pakistan due to the hefty burdens that recipient countries can be left with. Several projects under the Belt and Road Initiative, China’s ambitious global infrastructure initiative, have been canceled or downsized.

Since 2012, China has lent over $10 billion a year to African governments — and it lent $30 billion in 2016. More than half of Angola’s external debt, and a quarter of that of the Republic of Congo and Zambia, is owned by China, said the Moody’s report, released Wednesday. Much of this went to infrastructure, with China the biggest single national source of infrastructure funding to Africa as a whole from 2012 to 2016, according to the Infrastructure Consortium of Africa.

Chinese lending is helping to pay for the roads, railways, power plants and other facilities that sub-Saharan Africa sorely needs, said the report, which noted that the region’s lack of infrastructure is a crucial bottleneck to its economic growth. For example, Ethiopia’s economy grew by 10.2% in 2017, faster than any other country’s, and China-funded projects like the Ethiopia-Djibouti electric railway, irrigation improvements and electricity lines directly contributed, according to the report.

But investment that is funded through debt, from China or anywhere else, will always increase credit risks if it does not generate sufficient returns. And infrastructure projects in particular are often expensive and take a long time to complete — for instance, the Ethiopia-Djibouti railway went into operation five years after construction began, and cost $4.5 billion, according to the Ethiopian government.

This means that choosing the right projects is critical. But poor governance and weak institutions in sub-Saharan countries, compounded by their struggle to access financing in the first place, can lead to bad decisions — and China’s lending practices encourage this, the report said.

China does not demand that countries hit governance and socioeconomic development targets in exchange for funding, as the World Bank and EU development finance institutions do. As well as reducing the long-term growth potential of projects, this can also encourage cash-strapped governments to borrow unsustainably large amounts, the report said, citing a World Bank study of Kenya as an example.

The terms and conditions of Chinese loans are also often opaque, making it harder to see just how indebted countries actually are, and creating uncertainties as to whether China would agree to have its own loans restructured as part of a funding deal with another party, said the report. This can deter other sources of funding to the country, said the report, and is “a key sticking point” in ongoing negotiations between the International Monetary Fund and the heavily indebted Republic of Congo.

Countries in the region also often use their earnings from natural resources, like oil, as collateral for Chinese loans. This can mean the cost of servicing their debt will rise and fall with commodity prices, which can fluctuate wildly, potentially adding even more pressure to debt burdens, the report said.

Finally, though China may be willing to restructure debt to reduce short-term risks, negotiations can lead to worse outcomes in the long run, the report said, warning that countries with plentiful natural resources, or strategic infrastructure, could lose control of them. In December, Sri Lanka gave up control of its Hambantota deepwater port to a Chinese state-owned company for 99 years after it struggled to pay back the debts accrued during its construction. Losses like these are not good for creditworthiness in the long run, Moody’s said.

Li Ruogu, ex-chairman of the Export-Import Bank of China, one of China’s major lenders to Africa, warned in April that many countries along the Belt and Road route have high debts and low credit ratings, making it difficult for them to raise funds. “There are few countries with credit ratings above the ‘BB’ level, and the investment risks are relatively large,” Li told a forum in Beijing.

One sub-Saharan country, Djibouti, is among the eight countries most at risk of debt distress as a result of Chinese lending via the Belt and Road Initiative, according a March report by the Center for Global Development, a think tank.