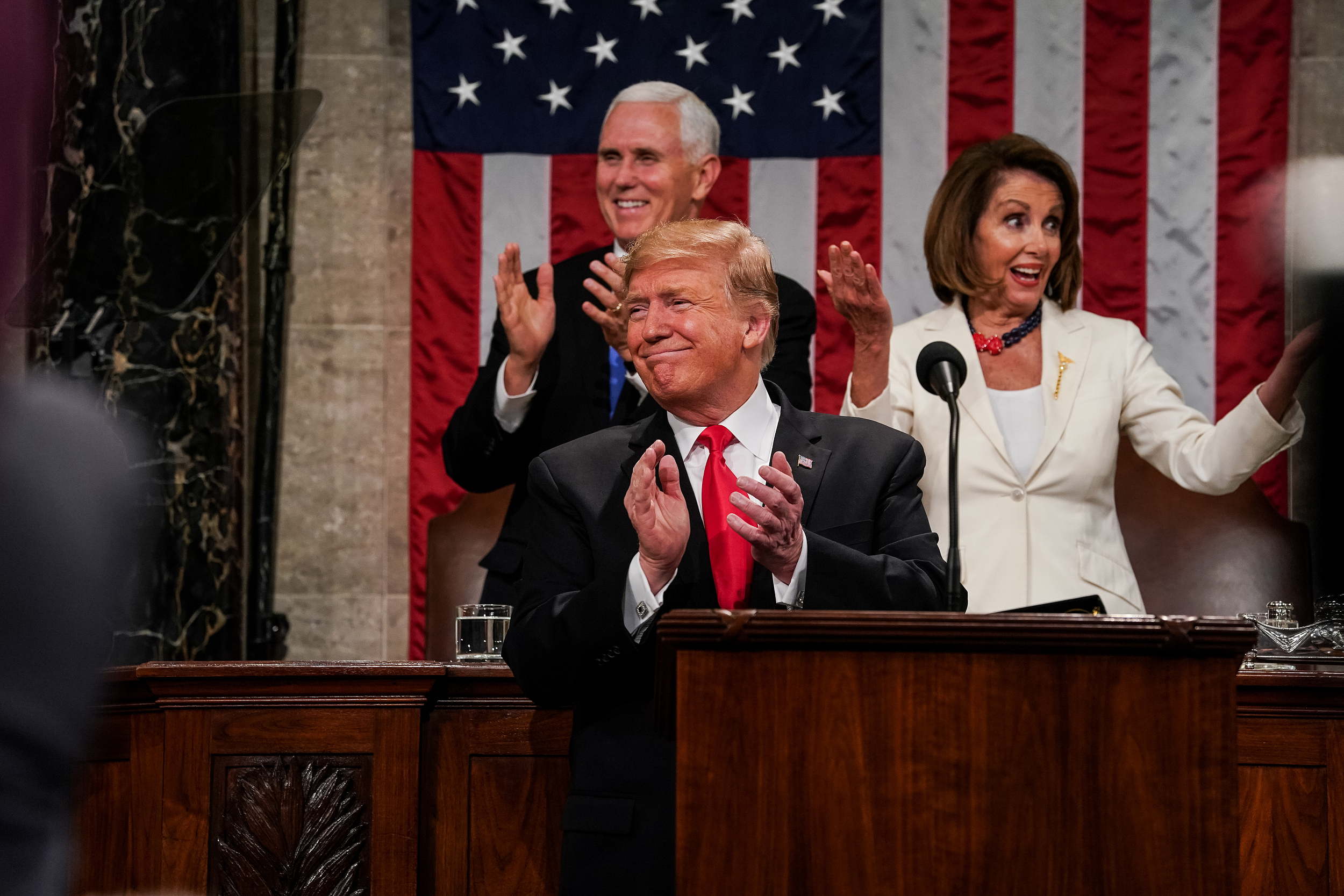 President Donald Trump, Speaker Nancy Pelosi and Vice President Mike Pence applaud during the State of the Union address in the chamber of the U.S. House of Representatives at the U.S. Capitol Building on Feb. 5 in Washington, DC.

U.S. President Donald Trump said any deal with China must ensure “real, structural change” takes place to narrow the country’s trade deficit and save American jobs, as a U.S. delegation was reportedly set to visit Beijing for new talks next week on the bilateral tariff dispute.

“I have great respect for President Xi, and we are now working on a new trade deal with China. But it must include real, structural change to end unfair trade practices, reduce our chronic trade deficit, and protect American jobs,” Trump said in his State of the Union address delivered Tuesday Washington D.C. time.

The comments come as the Wall Street Journal quoted an unnamed senior official with the Trump administration as saying that U.S. Trade Representative Robert Lighthizer and Treasury Secretary Steven Mnuchin will lead the delegation to the Chinese capital to continue negotiations aimed at striking an agreement to settle the bilateral trade war before a 90-day truce ends. Reuters, citing two unidentified sources, said that the American officials will start arriving in Beijing over the weekend following the Lunar New Year holiday this week.

That will mark the third round of face-to-face talks between Chinese and U.S. officials since Presidents Xi Jinping and Trump agreed in early December to suspend for three months their race to increase tariffs on goods.

The previous two rounds of negotiations have shown signs of progress. At their last round of talks in Washington at the end of January, China agreed to cooperate with the U.S. on intellectual property protection and technology transfers, and purchase more agricultural, energy and manufacturing products and services from the U.S., according to the official Xinhua News Agency. State-owned food trader and producer COFCO Corp. and Sinograin, which runs the country’s national reserve system of grains and edible oil, announced in separate statements this month that they have bought a total of around 4 million tons of U.S. soybeans.

However, Washington has maintained its threat to raise additional tariffs on $200 billion of Chinese goods to 25% from the current 10% starting at 12:01 a.m. March 2 if a deal isn’t reached in time. The U.S. has also slapped additional levies on another $50 billion worth of Chinese products. China has responded with retaliatory tariffs on U.S. goods. In total, the two countries have imposed punitive taxes on more than half of each other’s imports since last summer.

Trump tweeted last week that any settlement won’t be final until he meets in person with Xi. He also told the press that he plans to meet with the Chinese leader next month and that any agreement must go far beyond China’s purchases of American goods and include further opening of the country’s markets.

But the Wall Street Journal on Tuesday cited the senior American official as saying that Trump “hasn’t yet committed” to a summit with Xi.

China held a trade surplus of $323.3 billion with the U.S. last year, up 17% from 2017, as growth in exports far outpaced that in imports partly due to a rush by Chinese exporters to deliver on orders made by their American clients before Washington raises tariffs.

To read more about the U.S.-China trade war, click here.