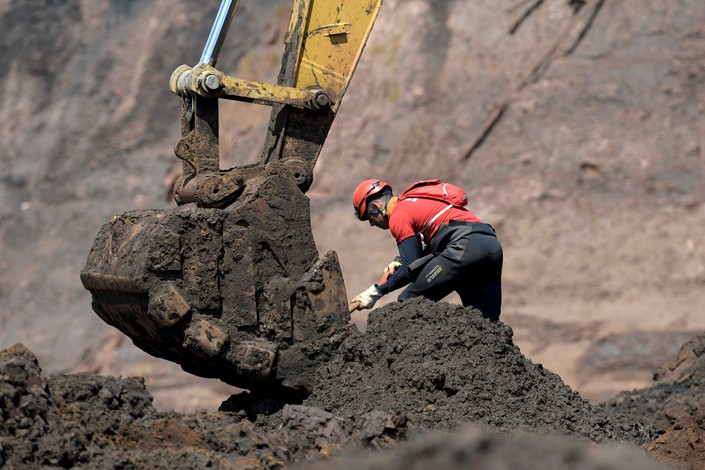 A member of a rescue team searches for victims of a collapsed tailings dam owned by Brazilian mining company Vale SA, in Brumadinho, Brazil on Feb. 10. Photo: VCG

China iron ore prices spiked to a nearly two-year high when trading resumed after the weeklong Lunar New Year holiday on concerns connected to Brazil’s Vale SA, a top supplier to a Chinese industry that producers over half the world’s steel.

Vale’s supply situation has been in focus since Jan. 25, when a dam associated with one of its mining operations burst in Corrego do Feijao in the state of Minas Gerais. The accident left 165 people confirmed dead and another 160 missing, according to data as of Feb. 10. Vale uses such dams and the lakes they hold up as part of its mining operation to hold tailing, or mining waste.

The price of iron ore for delivery in May spiked about 8% to 652 yuan ($96.16) per ton on the Dalian Commodity Exchange on Monday, the first trading day after the weeklong Lunar New Year holiday, reaching a high not seen since March 2017. The price settled down by 2.8% on Tuesday, ending the day at 634 yuan per ton.

The volatility in China followed similar earlier movements in other global markets as fallout continued for Vale in the wake of the original dam collapse. On Feb. 4 a court ordered Vale to halt production at its Brucutu mine, the largest iron ore mine in Minas Gerais, affecting 30 million tons of annual capacity. The company had previously halted output at 10 other mining facilities following the original accident, bringing total affected output to 70 million tons of annual capacity.

Vale was the world’s biggest iron ore producer in 2017, according to SteelGuru. At the same time, China is the world’s largest consumer of iron ore, which feeds a national network of mills that supply more than half of the world’s steel. China accounted for 51.3% of total global steel output last year, up from 50.3% the previous year, according to the World Steel Association.

But production in the market is set to start shrinking this year as local demand begins to drop with the slowing of China’s economy, according to a forecast last October from Australia’s Department of Industry, Innovation & Science.