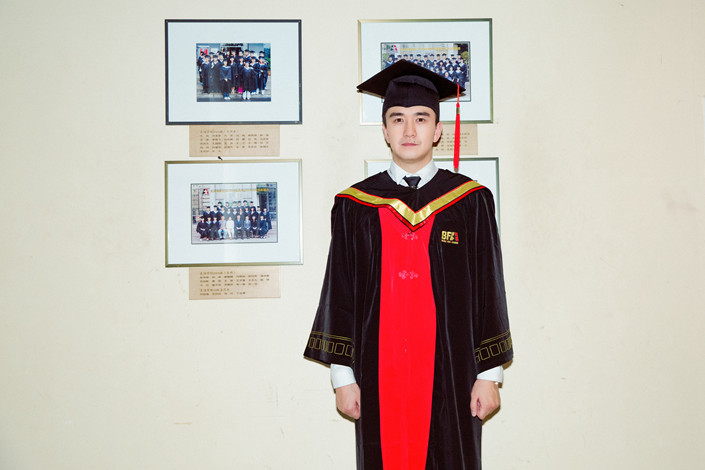 Zhai Tianlin poses for a graduation photo in Beijing on June 29, 2018. Photo: VCG

An actor who performed on China’s most-watched annual TV show this year has been accused of academic plagiarism, sparking a national debate on whether China’s education system gives celebrities special treatment.

A day later, doubts about Zhai’s academic qualifications — which include an impressive-sounding Ph.D. from the prestigious Beijing Film Academy — began circulating on the Chinese internet.

Social media users dug up a clip from a livestreamed Q&A with Zhai last year that appeared to show the actor’s ignorance of a major academic database. When asked if his thesis was available on Zhiwang, or China’s National Knowledge Infrastructure (CNKI) platform — a state-backed digital library that functions like JSTOR — Zhai looked confused and asked, “What’s Zhiwang?”

Commenters questioned how Zhai could have earned his Ph.D. if he knew nothing about a basic research tool like CNKI. Zhai also appears to have published no papers in any reputable academic journals, despite BFA’s rule that Ph.D. candidates must publish at least two articles, including one in a “key domestic journal.”

Additionally, an article Zhai published in May 2018 in an entertainment industry magazine was allegedly found by a Weibo user to be suspiciously similar to content written by Huangshan University academic Huang Lihua around a decade ago.

Zhai’s representatives denied that the actor didn’t know what CNKI was, claiming his apparent ignorance was intended to be a joke about the “tough endeavor” of thesis-writing. They added that Zhai had fulfilled BFA’s Ph.D. requirements, but did not provide details on the relevant papers published by Zhai, who is also a post-doctoral research fellow at Peking University’s Guanghua School of Management.

The state-run publication People’s Daily joined the debate Monday, calling on BFA and Peking University to respond to doubts about Zhai.

BFA said later that day that it had set up an investigation team to look into Zhai’s case, and that Peking University would take action based on the results of BFA’s investigation.

Chinese academia has long struggled with allegations of dishonesty and misconduct. In April 2017, academic publisher Springer Nature took down more than 100 research papers by Chinese academics suspected of faking peer reviews and of plagiarism.