By Yang Ge and Mo Yelin 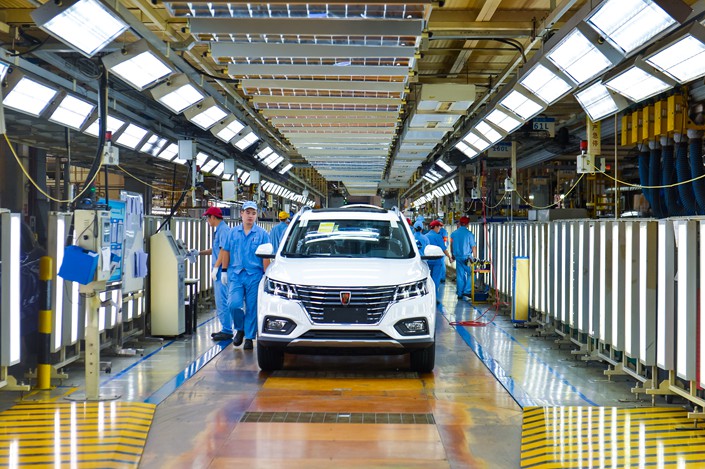 SAIC Motor Corp. Ltd.’s data for the first month of 2019 comes after the overall China auto market posted its first annual contraction in more than two decades last year. Overall sales fell 2.8% to 28.1 million units for the year, including a 19% decline in December, according to the China Passenger Car Association. The group expects sales to be flat this year.

SAIC said it sold 611,502 cars in January, down from 712,152 a year earlier, according to a stock exchange announcement on Friday. The 14% decline for the month represented an acceleration from December, when the company’s sales fell 10% from a year earlier.

SAIC’s shares fell 5.6% in Friday trading in Shanghai after the announcement.

Within its bigger number, sales for SAIC’s cars under Volkswagen’s and GM’s brands each fell about 11% for the month. The Volkswagen joint venture’s performance was roughly comparable with a similar decline for December, while the drop for cars bearing GM’s brands marked an improvement over a sharp 22% drop in December.

SAIC’s Wuling-branded cars, which it also makes in partnership with GM and another partner, tumbled 20% for the month, a sharp acceleration from an 8% decline in December. The Volkswagen, GM and Wuling brands collectively account for the lion’s share of SAIC’s total sales, around 87%.

SAIC’s sales slump was largely in sync with China’s broader car market downturn, said Zeng Zhiling, general manager at the Shanghai-based consultancy LMC Automotive. He predicted the automaker would continue to post year-on-year sales declines for the first half of this year, but that the trend could turn positive in the second half.

China’s car market surpassed the U.S. to become the world’s largest about a decade ago, fueled by a growing middle class that often considers car ownership as a must despite the high costs. Purchases of such big-ticket items helped to fuel the nation’s rapid economic rise, with China notching annual gross domestic product growth of around 10% or more for much of the first decade of the 20th century.

But the economy has begun to slow recently, putting a damper on car sales. Beijing has also put a strong emphasis on new energy cars in a bid to clean up the nation’s polluted air and create technologies that can be exported, even though consumers have yet to embrace such products.

Zeng added that despite SAIC’s January weakness, the month in general isn’t always the best industry barometer due to changing dates of the Lunar New Year around that time, which this year fell in early February but last year was in the middle of that month. “It isn’t comparable to look at the January’s sales, as that could be affected by the holiday season,” he said.