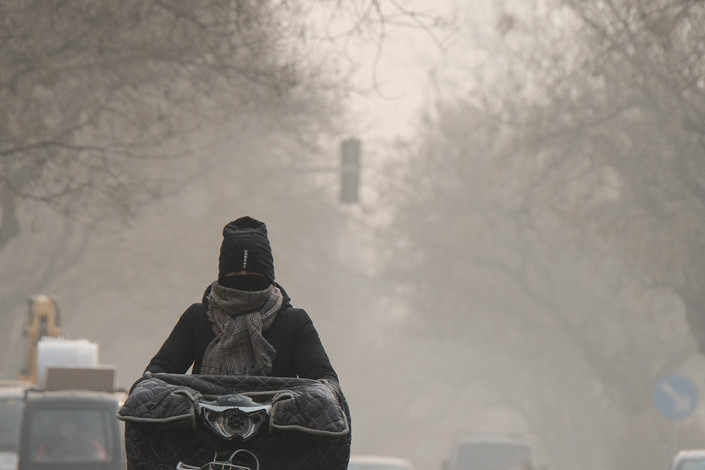 A commuter wearing a face mask rides through heavy smog in Beijing on Jan. 14. Photo: IC

Air pollution in 337 Chinese cities increased in January, with the average PM2.5 concentration rising 8.2% from the same period in 2018, according to the latest data (link in Chinese) from China’s Ministry of Ecology and Environment.

In the region surrounding Beijing, including Tianjin municipality and Hebei province, the average concentration of PM2.5 — hazardous particles with a diameter of less than 2.5 micrometers — rose 16%.

The ministry measures pollution by the concentration of PM2.5 per cubic meter. The primary sources of PM2.5 are burning coal, emissions from heavy industry and emissions from vehicles such as cars and trucks.

The rise in pollution in January follows disappointment that a majority of the cities included in the ministry’s data set did not meet the target air quality standard of 43 micrograms per cubic meter set by the 13th Five Year Plan in 2018, though the average across all cities included was 39.

Last week, Reuters released an analysis of official data in 39 cities showing that the average PM2.5 concentration had grown 16%, citing high industrial activity as the major cause for the rise. The increase in industrial output in the last quarter of 2018 signals that cities are unlikely to reduce pollution by the targeted 3%, Reuters reported.

In December, the government-backed Metallurgical Industrial Planning and Research Institute estimated that overall steel production would rise 11% to 886 million tons. By one estimate from U.S. analysts, output in 2018 may have hit 928.3 million tons.

The Fenwei plain, which encompasses major coal-producing provinces Shanxi and Shaanxi, saw pollution increase 16.4% from January 2018 levels, with an average concentration of 128.

Last October, the ministry announced that it would revise pollution targets for the October-March period to 3%, down from 5% in earlier drafts of the plan. A spokesman for the ministry denied that a lower target was set in order to offset slowing economic growth. Rather, the change was designed to compensate for the favorable weather the previous winter that enabled the pollution to drop 25% year-on-year. Greenpeace analysts previously told Caixin that favorable weather conditions may have accounted for up to half of the improvement.

Another change for the October-March period was that authorities further down the chain were allowed to decide for themselves how to meet targets, rather than centrally-issued “one-size-fits-all” orders for production cuts, as part of an effort to hold localities more responsible.